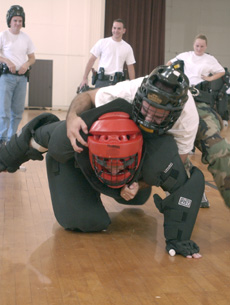 While many students pass the corner of Fourth and Chalmers every day on their way to classes at the University, few realize there’s another educational institution nearby.

For police officers around the state, the Police Training Institute is where they’ll receive their basic training.

Coralyn Beem, associate director of PTI, said the institute was the only state-legislated police training facility in Illinois. The Illinois state legislature created the facility in 1955 because officials wanted to standardize a formal training program for police officers. Before then, police departments and agencies trained officers by their own standards.

“They would learn the job on dry-runs or by the seat of their pants,” Beem said.

Now, however, police officers must attend a 12-week, or 480-hour, basic law enforcement program. The PTI offers the program eight times a year and each session consists of 40 to 50 students from across Illinois. About 4,000 officers are trained at PTI each year.

Lois Welling, an administrative assistant who has monitored activities at the PTI for 24 years, said students are first hired by police agencies or stations from across Illinois. Those agencies then contact the PTI and send their officers in for standard training.

“The Illinois Law Enforcement Training and Standards Board sets the curriculum and these are the skills students learn to become patrol officers,” Welling said. “We’re the oldest and we’re the best.”

Instructors train students on every aspect of being a police officer. Lectures in the classroom teach students about the law and firearms, while integrated scenarios and role-play situations teach students how to act when answering a dispatched call.

“Officers take what they learn in class and apply it to these situations,” Beem said. “In low-end situations, there could be yelling and screaming and the officers have to arrive safely, approach the situation carefully and handle the call within the parameters of the law.”

Beam said that as students progress through the 12-week program, the integrated scenarios escalate and become more difficult. Students learn about the use of force as a last resort.

“The goal is to teach officers how to do their job in real life environments and prepare them to go home and deal with these types of calls,” Beam said.

The training is anything but easy.

Twenty-one-year-old Fred Jones, who has been at the PTI for the past six-and-a-half weeks, will become a Winnebago County Deputy once he graduates.

Jones said a typical day starts between 5 and 5:30 a.m. and lasts until curfew at 9 p.m. He has two breaks to eat and shower, but said he was constantly rushing to the next class. Three to four times a week, Jones said he ran between two and five miles at the Armory. He also said he had two four-hour study block sessions in which he learned the law, control and defense tactics, how to handle weapons and how to communicate properly.

“They teach us to deflect comments people make,” Jones said. “They say if it feels good, don’t say it.”

Beam said the PTI program was all-encompassing in that it taught stress management, turned mistakes into learning opportunities and demanded that students show respect to everyone.

“Everyone needs to be treated with the same level of respect,” Beam said. “I don’t care if you’re a child molester. We can’t belittle and we can’t berate.”