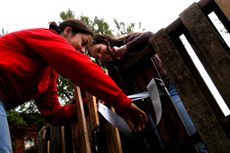 The event, which began at 3 p.m. Monday and lasted until 10 a.m. this morning, took a unique approach to catching students’ attention. Habitat for Humanity members built shanties – small shacks made of cardboard and wood – and slept in them Monday night to raise awareness of the problem of homelessness.

Mary Pearson, senior in LAS and president of the campus chapter of Habitat for Humanity, said she believes it is important for students to be exposed to homelessness.

“We feel that people on campus need to be exposed to the outside world,” Pearson said. “People live like this; we need to help.”

Although Shantytown is not a new event, this is the first year the organization raised money for a cause through the event.

The organization’s members canned on the Quad to collect spare change for the Salvation Army’s Men in Transition program, which helps approximately 775 men each year get off of the streets, transition back into society and become self-sufficient. The men are supplied with shelter and assisted in job placement, responsible money management and referral for drug and alcohol treatment, if necessary.

Two guest speakers addressed a crowd of students Monday evening. Major John Turner of the Salvation Army spoke about the Men in Transition program and Audrey Jerolds of the Cunningham Homelessness Prevention Program spoke about the homelessness situation in Champaign-Urbana.

Sonya Kontorovich, sophomore in FAA and Habitat for Humanity volunteer, said she thinks Shantytown is a unique way to inform the community about homelessness.

“It’s a good way to put homelessness out there for people to see,” Kontorovich said. “It has shock value; people might help out and donate in some way.”

“You don’t really notice the homeless situation, other than maybe two guys here on campus,” Ward said. “It’s much bigger. Most homeless you wouldn’t see here on campus.”