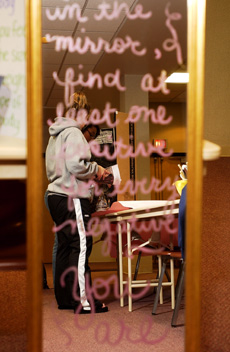 Students from across campus learned about feminism and women’s issues Wednesday night at the Wardall women’s exhibit, held in the Townsend Lounge of the Illinois Street Residence (ISR) Hall.

Crystal Verdun, one of the two resident director’s at ISR, said she came up with the idea for the exhibit through a national program called “Tunnel of Oppression” that educates people about prejudices in society. The program addresses different issues like African American and women’s experiences and the Holocaust, she said.

“This is a cool idea, it affects a lot of people,” Verdun said. “This is pretty powerful and I thought it would be something neat for women here to do and there are a lot of women in the Urbana north area because of Wardall, Lincoln Avenue and Busey-Evans.”

The movie Real Women Have Curves played on a television in the corner of the room and the music of Christina Aguilera and India Arie set the tone for the event, Verdun said. Copies of Maya Angelou’s poem “Phenomenal Woman” were also available for students to take as they toured the decorated boards displayed around the room. Topics of the boards included body image, self-esteem, women in the media and voting.

Heather Pehlke, senior in LAS, and Jen Jast, junior in business, made a display they titled “Love Your Body.” They covered the board in quotes and magazine pictures and said they wanted people to think about body image.

Pehlke and Jast made heart ribbons and wrote with lipstick on a full-length mirror, “When you look in the mirror, find at least one positive for every negative. You are beautiful.”

Veronika Hayes, junior in LAS, made another exhibit about the types of hats women have worn throughout history. She decorated her display with words that are often associated with women and how they evaluate themselves, including words such as “thin” and “diet.”

Michelle Palomino, a sophomore in LAS and resident of ISR, heard about the event through word-of-mouth and posters hung around the dorm. She came to find out more about herself.

“There are a lot of things we don’t know about and I found myself learning a lot,” Palomino said. “There’s a common understanding.”

Verdun said she was pleased with the overall turnout of people, which she estimated to be around 40 to 50 students.

“People are actually taking the time to look at the displays and they’re discussing this and taking the handouts,” she said.