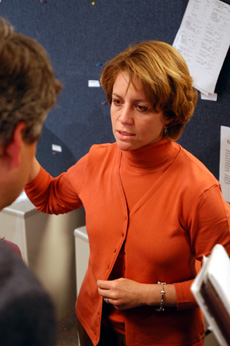 Rietz said she is looking forward to taking office, saying she plans to change the way the office is run and its relationship to the community.

“A fresh start is really necessary,” Rietz said. “I think the margin in the election shows that voters really understand the issues and are demanding a change in the office.”

The state’s attorney has the exclusive responsibility of prosecuting violations of the criminal laws of the State of Illinois, as well as regulatory laws of both the state and county. The state’s attorney also serves as the lawyer for Champaign County, providing legal advice, defense-of-court actions and the filing and presentation of cases brought by the county.

Despite the loss, Piland said he is happy about what his office has accomplished over the past 10 years.

“We’re very pleased and proud of what we’ve done,” Piland said. “Our efforts and our record of accomplishment have been recognized by others.”

Piland raised felony charging by 30 percent in his first eight years in office, and the felony conviction rate by 110 percent. However, speculation plagued Piland’s time in office. A few particularly controversial cases divided area residents and caused many to question the fairness of Piland’s prosecutions.

In October, Piland announced he would not file charges against a University parking division employee who was thought to have stolen more than $66,000 from the University over a four-year period. The case was in Piland’s hands for almost two years before he made the decision that the employee would not be criminally prosecuted.

University spokeswoman Robin Kaler said the University would continue to do its job to ensure the state’s attorney’s office that any case the University files is worth the office’s time to prosecute.

“We know there have been challenges and a lack of shared focus,” Kaler said. “We’re certainly optimistic that we can all work together in the future and that if the University is a victim, that the case will be prosecuted to the full extent of the law.”

Another case that raised speculation about Piland’s policies was the eavesdropping charges that were brought against Martell Miller and Patrick Thompson after they made recordings of the Champaign and University police without the officers’ knowledge. Although charges were dropped against Miller in September, some community members are upset that charges are still pending against Thompson.

Kimberlie Kranich is one of the founders of CU Citizens for Peace and Justice, a grassroots organization that raised awareness of the eavesdropping case. Kranich said she is hopeful about Rietz taking over the office.

“Piland tried to use the notion that we live in this dangerous county – that’s not the way to go,” Kranich said. “Rietz is closer to people and has a different philosophy.”

Rietz will take over the position of state’s attorney on Dec. 1.