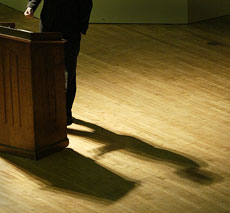 CNN anchor Anderson Cooper made it immediately clear to the nearly 500 people gathered in Foellinger Auditorium Monday night why he was at the University.

“I have an ulterior motive,” Cooper said. “I need tickets to this Thursday’s game.”

Cooper, host of CNN’s unconventional news program Anderson Cooper 360ø and a frequent anchor of breaking news events on the network, then moved on to talk about his job, as he shared his experiences covering the Iraq war, the tsunami in Southeast Asia and numerous hurricanes.

Cooper, a former ABC News correspondent and host of the network’s reality program, The Mole, explained the toughest story he has had to cover yet – the war in Iraq.

“In Baghdad, you can’t just wander around and find a story,” Cooper said. “You have a security escort and a set destination in mind.”

Cooper said reporters were given a list of things they could not do in Iraq, including going to a restaurant, hailing a taxi or standing in a crowd.

“After a while you find yourself almost trapped in a security bubble,” Cooper said. “It makes it very difficult to get an accurate sense of what’s going on.”

Cooper joked about the challenges he faced while covering four hurricanes this year.

“Covering hurricanes is one of those things I’d make fun of reporters for doing,” Cooper said. “The process of growing up is the process of becoming what you make fun of.”

Cooper explained that after spending 13 hours in the wind, it became difficult to bring a fresh angle to the coverage.

“I got to saying ‘Remember when I said two hours ago it was windy, well now it’s really windy,'” Cooper said.

Cooper also touched on the increasing polarization within the United States, with the talks of “red states and blue states, NASCAR moms and soccer moms.”

“People are encouraged by cable news to see things through a narrow lens,” Cooper said.

Cooper said the election coverage was particularly interesting because of the types of things that came into play during the campaign process, especially during the presidential debates.

“Covering the presidential election was fascinating,” Cooper said. “Everyone focused on the debate … didn’t realize how much preparation went into them. What kind of pen and pencils were at the podium, the ambient temperature of the room.”

Cooper also discussed his experiences of traveling to Sri Lanka in December to cover the aftermath of the tsunami, which he said was an experience he could not even describe.

“No amount of production could get across the overwhelming nature of the story,” Cooper said. “You’re trying to capture all the stuff you’re seeing, feeling and smelling, and put it into that little lens.”

Cooper’s last words included advice for students to stay informed and gain a bird’s-eye view of the world.

“If I had to recommend something to students, I’d recommend not only to follow your bliss but to listen to other ideas and keep your minds open,” Cooper said.

Sarah Kakumanu, junior in LAS and a self-proclaimed “news junkie,” said she was glad she attended the lecture.

“I was really impressed,” Kakumanu said. “He’s so knowledgeable about everything and so in touch with everything, even pop culture.”

Erin Renzas, sophomore in communications and a spokeswoman for the Illini Union Board, said it was a great opportunity to have Cooper speak at the University because of the unique style of reporting he commits to.

“We’re always looking to target a different audience, and we wanted to steer clear of straight politics,” Renzas said. “Anderson Cooper is really representative of a new journalistic approach, an alternative to the regular newscast.”