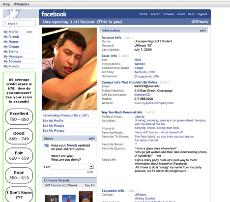 Students often put up incriminating or potentially embarrassing information about themselves on their Facebook profiles without realizing that anybody could access them. Beck Diefenbach

When Adam Gartner created his Facebook account, he expected to use it to meet more people and show off to those who looked at his profile. What he did not expect was for his own profile to be used against him as evidence by a University police officer.

“I didn’t even know that he could use that,” Gartner, a 22-year-old junior in ACES, said.

Not knowing that University police could access his Facebook profile resulted in Gartner being given a citation for obstructing justice.

The popular social networking Web site that is available to anyone with an “.edu” e-mail address is not a secret on university campuses known only to students. Increasingly, employers, school administrators and now law enforcement have been using the semi-restricted network that features more than 7.5 million registered users. Requests for comment from Facebook were not returned as of press time.

Fitzpatrick said Facebook was used in the case involving Gartner and his friend Marc Chiles and that the information on Facebook was public. Additionally, on July 21, a crime report listed on the University Division of Public Safety Web site also mentioned the use of Facebook in the investigation.

“Our officers use a variety of means to verify or follow-up individuals’ stories,” Fitzpatrick said. “(Facebook) is not the only avenue or source of information that we use.”

However, on Thursday, The Daily Illini identified a Facebook account registered under Fitzpatrick’s “[email protected]” e-mail address with the name “Kris FItz” (sic) and as “UIllinois Staff.” At of the time of the interview on Monday afternoon, however, the account could not be found under the same e-mail address.

Gartner said he and his friend, Chiles, were walking near the intersection of Fourth and John streets on July 20 when Chiles decided to urinate in public. When an officer approached them, Chiles ran away and left Gartner with the officer.

Gartner said he lied to the police officer, saying he did not know Chiles’ last name and that he had only met Chiles that night. In reality, both students are from Bloomington, Ill., and had been roommates during freshman year, Gartner said.

Hoping that the officer would just let him go, Gartner said he lied to help get his friend off the hook.

While he was standing with the officer that night, a phone call came into Gartner’s cellular phone from a friend, he said, and the officer took the phone and asked the caller what Chiles’ last name was. The officer then had a full name for both Chiles and Gartner.

Gartner said the officer said he could make a Facebook check to see if the two knew each other. Unsure what to make of the officer’s claims, Gartner decided later that night to disconnect his friendship with Chiles online.

“I was really scared of it. I thought he was just BS-ing,” Gartner said. “And then I got an e-mail . that said ‘perhaps you’d like to explain to your dean why you destroyed your friendship link on Facebook.'”

Gartner and Chiles were called to receive their citation notices. Gartner received a $195 ticket for obstruction of justice and Chiles received a $145 ticket for public urination. Gartner said he does not deny the charges against him and that he is “just going to pay the fine and have it be done with.”

Chiles said he was surprised when he found out the officer had used Facebook.

“At first, I didn’t believe it,” Chiles said. “I didn’t think a real, respected police officer would use Facebook as any kind of evidence.”

Rebecca Jeschke, media coordinator for the Electronic Frontier Foundation, said the information students post online is public and that the foundation has seen people use social networking Web sites, such as MySpace and Facebook, as law enforcement tools.

“To think that it is a protected place where only students can see you is a mistake,” Jeschke said.

Some of the Facebook profiles of University police officers found by The Daily Illini did not have names that corresponded with their actual name listed in the University online phonebook or were only partial names of their actual names. Only one profile actually contained a photo of the account holder, but not as the main profile picture.

Christopher Hawk, the University police officer whose name was on the police report associated with Gartner and Chiles, has an account listed on Facebook under his University e-mail address as “C Hawk” with a photograph of a squirrel with the Superman logo underneath its fur. Facebook also lists the account as the creator and only member of the Facebook group “I Hate Posers Who Don’t Have the Right To Whine and Cry,” where the group description says: “Why do people whine and cry about “oh! I hate bike cops!” when the bike cops simply find them drunk on the side of the road??? These posers are so full of crap that their eyes must all be brown… and you can see the blonde’s roots…”

The Student American Civil Liberties Union at the University has said that it might be working to raise awareness of Internet privacy issues for students in the fall.

Colin Bishop, president of the Student ACLU and senior in LAS, said that while students are to blame for voluntarily putting private information out into the public, the fact that Facebook was being used to perform a type of monitoring of students made him uncomfortable.

“It’s unfortunate that the police would want to use Facebook as a way to intimidate students and have a way of keeping tabs on who they’re friends with,” Bishop said.

Despite knowing that Facebook now has police officers searching it, Gartner said he will not be making his profile any less public than it is now and did not know how to change his privacy settings.

“I think it’s dumb to make it so that people can’t click on you,” Gartner said.

Chiles, on the other hand, said he would be changing some settings.

“I’ll probably make my account private, and even think about what kind of pictures I put up.” Chiles said.

And while he said he will not be likely to make his profile visible only to friends, Gartner has restored his friendship on Facebook with Chiles and is more aware of just how open his account is to others.

“Look out, because they can look up stuff like that now,” Gartner said. “You’re making it public by doing that.”