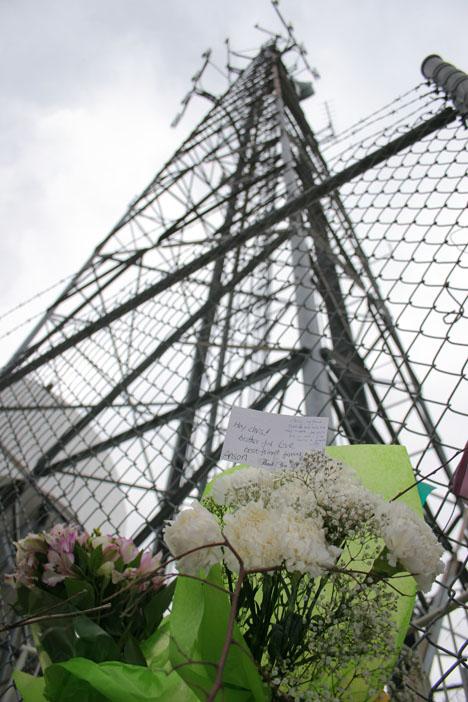 Flowers left by loved ones of Christopher Daniel Fu, junior in Engineering, who fell from the WILL broadcast tower early Monday morning and died. Brad Vest The Daily Illini

Editor’s Note: This update removes quotes from Christian Tillch-Walker. Tillich-Walker called The Daily Illini upon realizing that he had confused Christopher Fu with someone else.

Christopher Daniel Fu of Wilmette, Ill., an undergraduate student at the University, was found dead early this morning outside of Campbell Hall, 300 N. Goodwin Ave.

Jeff Christensen, assistant chief of the University police, said there are no signs of foul play, but the student was found close to the broadcast tower of WILL studios.

“We have recovered a scarf and a pair of glasses approximately 140 feet up the tower,” Christensen said. “He was on the tower. Now the question is whether it’s accidental or intentional.”

Fu was found east of a fenced area outside on Campbell Hall in the parking lot.

Fu was a member of the I-Parkour Facebook group, a group that is part of a larger movement dedicated to clearing obstacles through building jumping. According to Parkour.com, the goal of the sport is “to become a part of the environment in order to develop your mind and body.”

Fu posted a discussion topic on the I-Parkour discussion board Oct. 18 suggesting members of the group meet on weekends to practice Parkour.

Christensen said police are looking into the connection between Fu’s death and Parkour.

“Just because someone is a member of a Facebook group does not confirm anything,” he said.

The Parkour.com Web site, as site for the larger parkour movement, has images of people jumping from various buildings and towers and offers tutorials on “landing from height.”

As part of the investigation, police checked the weather conditions at the time of the fall. Christensen said there were no factors, such as ice or rain, that could have lead to Fu slipping from the rails of the tower.

Police are still investigating, but it is not clear when further information will be available. Crime scene technicians from the Illinois State police are assisting in the investigation.

Champaign County Coroner, Duane Northrup, said that an autopsy will be performed Tuesday morning. Until then, no details of Fu’s death can be released.

Read tomorrow’s Daily Illini for the full story and check DailyIllini.com throughout the day for updates.