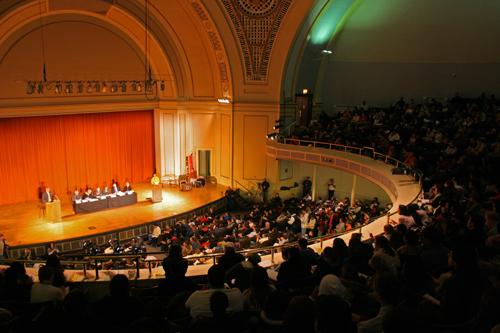 Members of the six member panel listen as students, community members, and other citizens address their concerns with the state of racism on the campus of the U of I Thursday night at Follinger Auditorium, February 1, 2007. Follinger and Greg hall were ME Online

A line of six panelists faced a packed Foellinger Auditorium of students and community members asking hardball questions, addressing the “hostile campus climate,” and the “long history of racism, privilege and intolerance at the University.”

Events including the “Tacos and Tequila” party and certain Facebook groups were the catalyst for an open forum titled, “Racism, Power and Privilege at UIUC.” It was hosted by Students Transforming Oppression and Privilege (STOP) Thursday night to engage the campus and community in an open discussion about “the racist and hostile environment” at the University, according to STOP’s press release.

The panelists for the forum were President B. Joseph White, Chancellor Richard Herman, Vice Chancellor Renee Romano, Provost Linda Katehi, Dean of Students William Riley and Vernon Burton, faculty senate member. The panel was given a list of seven demands, which can be found in length on the iResist Web site, and an ultimatum to respond within 15 business days with a concrete course of action.

Throughout the two hours, the responsive audience clapped enthusiastically, some individuals standing to give their commendation. Crowded rooms at Gregory Hall and the Illini Union provided live satellite projectors for those who could not find space in the auditorium.

Celina Villanueva, senior in LAS and president of the Mexican Students Association, was the first to “break the imposed code of silence.” She “stood unafraid” behind the podium addressing the Tacos and Tequila incident and speaking against the “blatant form of racism that is the Chief” to thunderous applause. The administration’s failure to respond in a prompt and efficient manner, Villanueva said, was condoning the acts of participants in Tacos and Tequila.

Shawn Lampkins-uThando, graduate student and spokesperson for STOP, illustrated why they believe the Chief is racist.

“Imagine that you’re a Catholic,” he said. “And to you, the pope is a sacred figure. One day you go to this institution and at halftime, you see him running around sprinkling holy water on the crowd.”

“It’s a hostile environment,” he continued. “And the administration is not doing anything about it, in terms of formally and publicly, to stand up and be a committed leader to these issues. We demand to see structural institutional change.”

Lines of students came to the microphones presenting their concerns, complaints and testimonials of harassment and discrimination.

Regina Tsosie, an American Indian, shared her 14-year-old daughter’s experience at a middle school basketball game. The opposing team mascot was the warriors. Her daughter was embarrassed when she saw four white men with red-painted faces doing tomahawk chops and war whoops.

“She was so humiliated,” Tsosie said, her voice breaking. “Just to see her expression and see her brown eyes swelling up with tears, it hurt me to see my child hurt.”

Tsosie was one of many who came in support of their children and in opposition to the Chief tradition.

One male University student, wearing a bright orange Illinois shirt and a blue Illinois hat, was the lone pro-Chief voice in the auditorium who spoke up to the crowd’s boos and jeers mixed with scattered clapping.

“The lack of individuals speaking different view points in the forum,” said Reem Rahman, junior in LAS, “was reflective of the fact that (those who are not present) did not acknowledge the critical barrier of racism, privilege and power as the root cause of this hostile campus climate.”

The question and answer session was the first chance the panelists got to respond and voice their opinions and thoughts.

The first question to White regarded his the plans to change the use of Chief Illiniwek. His reply of appreciation for the forum was cut short by an “answer the question!” from the audience that drew applause. To answer, White declined to comment on what the Board of Trustees planned to resolve in 2007.

“If you really mean to solve racism, then why are all the panelists white?” someone yelled, referring to the fact that all of the administrators for the University are white. This elicited loud applause and more than a few snickers.

“I’m not going to speak to why I’m white,” Romano said after White and Herman spoke. “But I want to say that white people can be as dedicated to the issues of inclusion as anyone in this room. And I’m convinced that we need everyone, this whole community, to move forward.”

Romano agreed with STOP that silence is the worst thing and there needs to be more dialogue in the future.

“I was so proud of the students,” she said. “We need an atmosphere of mutual respect, and the administration needs to listen to the students and treat them as equals. I know people are hurt, and I feel really bad about that, but we’re committed to working these issues out.”

White, who seemed to be the crowd’s scapegoat for the night, endured more than a few interruptions and jeers from the audience. However, he accepted it as just one of the responsibilities of leadership and sympathized with the students’ plight.

“I have a great desire for everybody on this campus to feel safe and be treated with respect and dignity,” he said. “It’s very distressing to me that’s not the case … I heard the pain in their voices and saw it in their eyes. When people talk about their children and their pain, it really touches you.”

The students were adamant to point out that it has been 15 years since students demanded for the removal of the Chief in 1992.

“I don’t see why it’s so hard to extrapolate from one’s personal experience that these are sacred to people,” Lampkins-uThando said. “It promotes understanding of a culture that is inaccurate, and therefore stereotypical. People might think they’re not racist, but their behavior is racist.”