Students play with snow on Quad 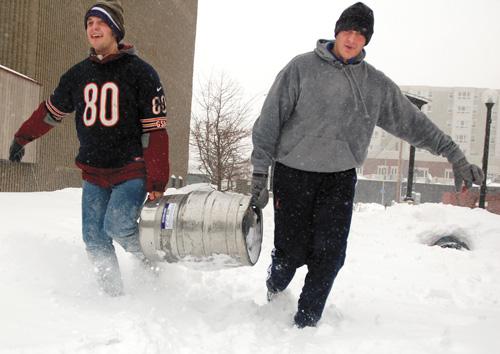 Using lunch trays as sleds instead of piling them with dorm food, University students filled in the steps of Foellinger Auditorium with snow and made themselves a sledding hill. Despite a blizzard warning, more than 100 people were on the Quad on Tuesday to enjoy a rare snow day at the University. The last time there was a snow day was 1979.

Miles Kilgallon, sophomore in LAS, went to the Quad with his friends for a snowball fight and to play frisbee but decided to borrow lunch trays from people after he saw them sledding down the steps of Foellinger. After sledding for more than an hour, Kilgallon and his friends still lined up to take their turn.

Students also found time to exercise by running across the Quad or using skis rented from Campus Recreation to get around. Others played Red Rover, tackle football, had snowball fights and built snow forts.

Ali Leipsiger, senior in ACES, was on the Quad playing in the snow and building a fort with her friends for more than an hour.

“We had a snowball fight, did some wrestling, and now we’re getting down and dirty,” she said.

Leipsiger was building her fort using the snow that a tractor clearing pathways pushed to one side of the Quad. While working on the fort, Kirstin Hughes, senior in Engineering, dug herself deeper into the mound, creating an opening to the fort.

“We’re trying to see how many people will fit in it,” Leipsiger said. “But I doubt all six of us will.”

Megan Earnest, senior in AHS, also helped build the fort. When the tractor came by and purposely pushed snow into their fort, the girls couldn’t have been more excited.

“That was sweet. We’ll take it,” Leipsiger chimed in.

Despite enjoying the snow on the Quad, Leipsiger wasn’t happy with the falling snow Tuesday morning. She had to walk to her 9 a.m. class for a scheduled exam and said she was in a bad mood. Only after her teaching assistant announced the cancellation of classes did she walk home happy.

“I haven’t had a snow day since the sixth grade,” she said. “High schools take pride in not canceling. I never thought it would happen.”

Walking a little farther across the Quad, it was hard not to notice Jeff Wagner, sophomore in LAS, getting tackled in the snow. As he got up to brush himself off, his bare hands were beet red.

Even though he was blowing into his hands to warm them, he said he didn’t manage to find time to purchase new gloves.

Wagner said he decided to get to the Quad by bus but thought it was a bad idea because it stopped half a block past his stop.

For Rob Bernas, graduate student, driving a car or bus didn’t seem like a safe idea. After his friend Candi Lauret spent an hour shoveling her driveway to use her car to pick him up for lunch at Murphy’s Pub, he declined.

“He didn’t trust me to drive,” said Lauret, senior in Education. “So we had to walk.”

After just watching “An Inconvenient Truth,” both Bernas and Lauret blamed the snowy weather on global warming.

“We’re blaming Al Gore for everything,” he said.

Sitting down to have a beer after spending most of the day studying, Bernas enjoyed a break for lunch and from the cold.

“It’s nice to have a day off in the middle of the semester once in a while,” Bernas said.