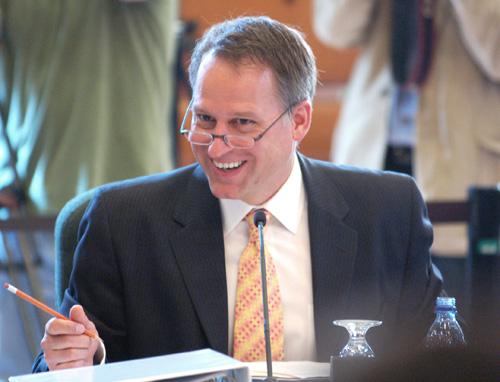 Trustee Lawrence Eppley makes a comment during the Board of Trustees meeting at the Pine Lounge in the Illini Union Tuesday morning March 13 2007. ME Online

The University Board of Trustees ratified the Feb. 16 decision to retire the Chief Illiniwek tradition Tuesday morning, a move that is believed to be the final step in the elimination of the University’s former symbol.

An amended version of the resolution proposing board ratification of Chairman Lawrence Eppley’s decision to retire the tradition received only one “no” vote. The resolution was jointly formed by President B. Joseph White and other University officials, and was the first item to be voted on.

Eppley moved to consider the items outside the others on Tuesday’s agenda which were not considered until Tuesday afternoon.

David Dorris was the only trustee to vote against the resolution.

Trustee Frances Carroll proposed two amendments to the original resolution. She said the first portion stating the Board “adopts and ratifies the actions announced on Feb. 16, 2007, ending the performances of Chief Illiniwek and further approves, adopts, ratifies and confirms all other actions taken by University officials with respect to the consensus process” was unnecessary. Eppley thanked her, but said he felt the statement was necessary and it remained in the final text of the resolution.

Carroll also proposed that the responsibility of ensuring the “immediate conclusion” to the use of the symbol, regalia, logo and the names “Chief Illiniwek” and “Chief” be delegated to the chancellor instead of the “campus administration,” as was stated in the original resolution. She also requested the addition of a statement revoking the 1990 board resolution officially naming the Chief as the symbol of the University.

Those changes were accepted by the board as a whole.

Dorris said he objected to the resolution for technical and personal reasons. He said it violated the bylaws of the board requiring items to be published at least 48 hours before the beginning of the meeting.

That bylaw applies to agendas, not specific items, University Counsel Tom Bearrows said. Since the item was listed on the agenda before the time limit, Bearrows said it was within the boundaries of the bylaws.

“This is a public declaration that the people of the past were wrong to enjoy this tradition,” Dorris said. “I will never do that.”

The second resolution concerning the Chief was also voted on Tuesday morning, but was defeated.

The resolution called on the University to join a lawsuit filed by current Chief portrayers Dan Maloney, graduate student, and Logan Ponce, sophomore in Engineering. The lawsuit claims the NCAA’s actions against the University for the use of the Chief were illegal. The suit is still pending.

Dorris submitted the resolution and was the only trustee to vote in its favor.

Maloney and Ponce also filed a request for a restraining order against the University to prevent the elimination of the Chief, but it was denied on Feb. 16.

Dorris objected to the decision to hire outside counsel during the University’s appeals against the NCAA’s decision because the arguments were “180 degrees different” from the position of the board.

Athletic teams and other students have suffered enough and precious state funding is better spent elsewhere, he said.

“No one’s going to be happy about this decision,” Sperling said. “Each side has lost something … but this fine institution has not been taken away.”

He added that if outside counsel did argue contrary to the board’s position it is a valid issue and should be looked into by the board.

Students and community members on both sides of the issue gathered outside the Pine Lounge Tuesday morning and received wrist bands granting them access to the room. The public gallery was filled and one corner of the room wore bright orange shirts, some with the phrase ‘Save the Chief’ across the front.

A video screen was set up in another room in the Illini Union for overflow opponents and supporters.

Three of the six public commentators who spoke at the beginning of the meeting addressed the retirement of the Chief. Howard Wakeland, an emeritus University professor, addressed the board on behalf of the Honor the Chief Society, calling the Feb. 16 announcement an “administrative fiat.” He urged the board to join the lawsuit against the NCAA and allow a court to determine the legality of the body’s decision.

Following the meeting, Wakeland said he was not surprised by the board’s actions but believes they could regret them.

“The winners here are the NCAA and (state Senate president) Emil Jones,” he said. “In the long term, the University lost.”

People who were in favor of retaining the Chief were not treated fairly by the board during the consensus process, Wakeland said, but there are more important factors to look at now.

“The question really is who hired outside lawyers because that’s the center of this storm,” he said. “I think David Dorris was right on the tail of something big that may never surface.”

Maloney said he was disappointed with the board’s decisions, but that he, Ponce and the council of chiefs will move forward.

“I’m disappointed mainly because I still feel like I’m an outsider on this,” he said.