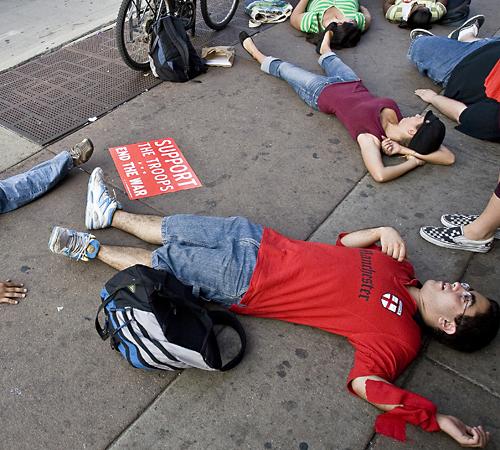 Anti-war protesters line the sidewalks of Green Street during a “die-in” on Thursday evening. The two-hour protest was organized by the Campus Antiwar network and drew more than 60 protesters. Erica Magda

When the “walk” signs turned on at the intersection of Wright and Green streets on Thursday evening, pedestrians flooded into the streets.

And then they dropped to the ground. Other protesters traced the outlines of their bodies with chalk as they chanted.

Click to view an audio slideshow about the protest.

More than 60 protesters, including University students, Champaign and Urbana residents, local high school students, University alumni and war veterans laid down in the middle of the intersection to protest the war in Iraq.

“It’s on a very busy street and is a reminder of the cost of war,” said Walter Pituc, junior in LAS, who spoke on the behalf of Campus Greens earlier that evening and is running for a seat on the Champaign County Board. “People can forget that there are people fighting and that lives are being lost.”

By running out into the streets and lying down, protesters wanted to visually remind people about the loss of life throughout the war in Iraq.

Protesters wore red shirts and arm bands and carried pickets as they walked down Green Street to the intersection at Sixth Street. They laid on the sidewalk for 10 minutes.

“I think it’s a good thing,” said Pritam Sukumar, graduate student, said as he watched the protest from a bench in front of Follett’s Bookstore, 627 S. Wright St. “I don’t think it’s effective, but I think they are making a point.”

The Campus Antiwar Network, also known as CAN, hosted the “die-in” protest. It was the group’s first local event.

The event was organized by University chapter members including Andrew Zimmerer, senior, Steve Wyatt, junior, and Pete Rhomberg, sophomore, who are all in LAS.

The protest also had the support of other local organizations including the Arab Student Association, Champaign Citizens for Peace and Justice and the University chapter of the International Socialist Organization.

Paul Wisovaty, spokesperson for the Champaign Chapter of Vietnam Veterans Against the War, said he attended the event because even after 40 years, there has been no change in foreign policy coming out of the White House.

“Americans have been playing Frisbee with their dogs when they should be out here supporting the troops and stopping the violence,” the Vietnam veteran said.