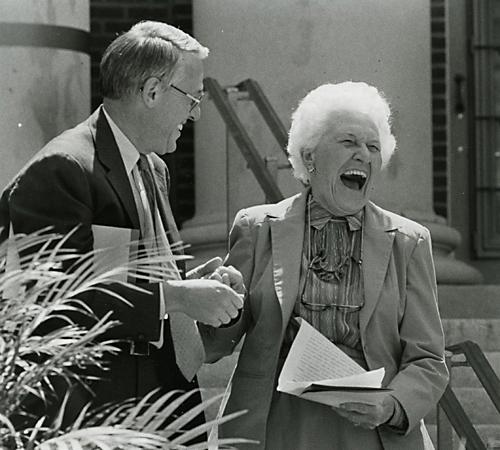 Helene Foellinger, class of 1932, reacts to a hug and kiss from University President Stanley Kenberry at a rededication ceremony on April 26, 1985. It honored her $3.8 million contribution. Daily Illini file photo

In 1907, University President Edmund J. James predicted the significance of the University’s new auditorium in his dedication address: “This building should in time be a focus for the historic interests of this University, no less than for its academic life.”

As the weekend’s festivities celebrated 100 years of Foellinger Auditorium, its history is taking center stage.

According to various University Archive documents, the University asked the Illinois Legislature for $200,000 to build architect Clarence H. Blackall’s ideal auditorium. However, the legislature appropriated only half that amount, forcing Blackall, who graduated from the University in 1877, to cut back on his plans. The money was contingent on the fact that it would be used for a completed building, so Blackall designed it with future renovations in mind.

“My best wish for that building would be to have it go up in smoke some night, and somebody would have the chance to rebuild it right,” Blackall said in a January 1923 letter to J.M. White, architect of Smith Hall, Altgeld Hall and an addition to the Natural History Building.

Click to view an interactive timeline of the buildings life.

The building contract went to the English Brothers Company in 1906, and the auditorium, made of brick, Indiana limestone and supported by a granite foundation, was dedicated during two evenings of concerts and ceremonies on Nov. 4 and Nov. 5, 1907.

Admission was 50 cents for the Monday ceremony and $1.25 for Tuesday, with tickets for both days costing $1.50. On Monday, James delivered his address.

“May the thronging crowds of students who are destined to follow us perform more worthily their duties than we have done and may the voices which they may hear from this rostrum stir them to greater deeds of achievement to higher aspirations than any we have been able to reach,” James said.

Originally intended to house the school of music, the auditorium was dedicated in honor of Edward MacDowell, a prestigious American composer.

“All that is noble and uplifting and refining in oratory should find an equal welcome here,” James said during his speech. “Great orators of this and other countries may find here a Mecca toward which their eyes may turn as quickly and surely as the great musicians.”

In 1983, Helene Foellinger, a newspaper publisher and business executive from Ft. Wayne, Ind., who graduated from the University in 1932, donated more than $3 million for the auditorium’s renovation.

After 78 years of maintenance and small renovations, including an effort to fix the building’s acoustics, the auditorium was rededicated as Foellinger Auditorium in 1985.

Architect Walker Johnson used the original blueprints, drawings and tinted lithograph for the project, carrying out most of Blackall’s original intentions.

The renovation added more than 6,000 square feet of backstage area, a new wooden stage floor, updated production elements and included various other improvements. Per Foellinger’s request, a photomural was added to the lobby that chronicles student life and campus environment.

After the April 26 rededication, the Atius-Sachem Mom’s Day Sing, which is still a tradition today, was the first event to be held at the Foellinger Auditorium. Foellinger herself attended the event, said Willard Broom, retired assistant dean of students. Broom served on the committee that decided how the updated building would be used after Foellinger’s donation.

“I think one of the ideas that emerged was the desire to make it accessible and for use of student groups and other groups without having to spend a large amount of money for support,” he said.

Broom also explained that Foellinger is a good alternative to Assembly Hall for smaller events and less expensive to use than the Krannert Center for the Performing Arts, which is a professional production venue with high costs because of the high quality of production.

Today, Foellinger Auditorium serves as a campus landmark, illuminated by 396 lights atop its copper dome, which is more than 20 feet greater in diameter than the Capitol building in Washington, D.C. Thesetrademarks came as improvements as a part of Foellinger’s gift.

“It’s a true icon of the University,” said Phil Strang, manager of Foellinger Auditorium. “It was built to be the hub and center of activity, and I think it still qualifies as that.”

Monika Pandya, assistant director of development for LAS, served as the auditorium’s manager from 2000 to 2005 and observed an increase in the building’s use during her term.

“No matter what your major is, chances are you’ve had a reason to be in that building,” Pandya said. “It’s the one building you have in common with everyone who has come before you and everyone who will come after you.”

Strang said that approximately 17,000 students come to Foellinger for class and another 5,000 to 10,000 attend various events each week.

“In this modern era, there’s probably something going on here five nights a week as well as all day Monday through Friday,” he said. “I like working with the different student groups and the diversity of events.”

As for Foellinger’s future, Strang said that replacement seating and new paint on the interior arches are next on the agenda of improvements. He said he would also like to see new plaster and painting in the hallways and a temperature control thermostat.

“For the most part, I think the University has done a good job maintaining the building for how old it is,” Strang said. “I hope I’m in that good of shape when I’m 100 years old.”