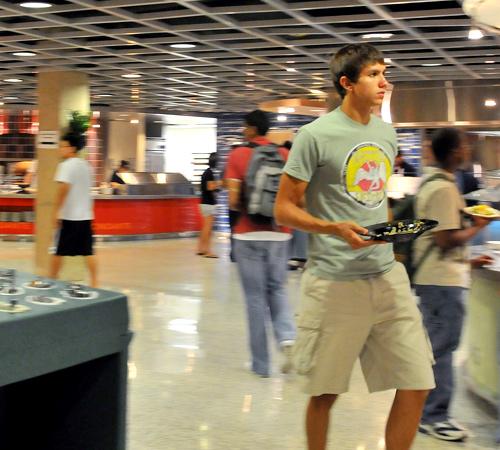 Pennsylvania Avenue Residence Hall serves breakfast, lunch and dinner every day. It is famous for its All You Care to Eat – After Dark option, commonly known as “late night.”

Students who want to slide down the steps of Foellinger Auditorium on a tray this winter won’t find one at the Pennsylvania Avenue Residence Hall dining hall.

The cafeteria opened without trays last week, kicking off what housing officials called an experiment in environmental sustainability. The University is one of at least 20 schools around the country hoping that the elimination of trays will reduce waste and expenses.

“It’s a chance to try something innovative and sustainable,” said Kirsten Ruby, assistant director of housing for marketing.

Throughout the year, the housing administration will measure food waste and energy consumption at the dining hall and compare it to data from cafeterias that still use trays.

The University hopes to replicate the success of other schools, Ruby said. One such school is Grand Valley State University in Michigan, which expects to save almost $80,000 annually after going tray-less, according to a tray-less dining report done by Aramark, a food service company.

A chain of expenses starts with the plastic trays: uneaten food, water to clean off the leftovers and electricity to heat the water. Supporters see the move as a way to reduce waste of all kinds on campus.

“It’s good for the environment,” said Sri Yerra, senior in LAS. “It’s a little trouble without trays, but it’s good to know you are helping out.”

The University is a major consumer of water from the Mahomet Aquifer. Gregory McIsaac, professor of environmental science at the University, said any reduction in water use could help preserve the local water supply.

“It’s a fairly large aquifer, but over time it could be depleted,” McIsaac said.

But not all students favor the change. Some found it awkward to carry plates without trays, and others don’t want to interrupt meals by getting back in line for more food.

“I think it’s more handy to eat with a tray,” said Rachel Luttrell, freshman in ACES. “It’s easier to carry stuff. Without a tray, you have to get up over and over again.”

No decision will be made on the future of tray-less dining at the University until the switch at the Pennsylvania Avenue dining hall is fully analyzed, Ruby said.

“It’s an example of a change that will take some adaptation,” she said. “We don’t have it in our immediate plans, but it could be an option in the future.”