No suspect in sight for Eye of Sauron prank 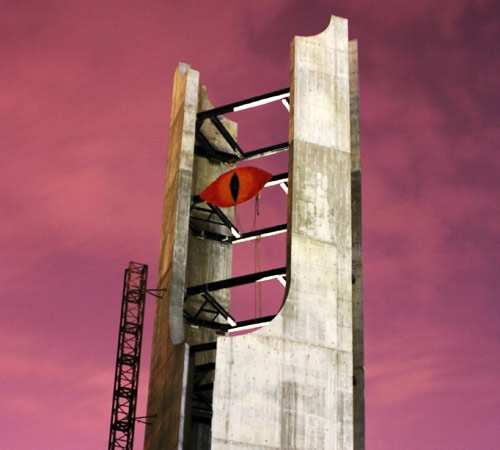 A replica of the Eye of Sauron hangs from beams on the McFarland Memorial Bell Tower early Sunday morning. Trevor Greene

A replica of the Eye of Sauron from the Lord of the Ring series hung from beams on the McFarland Memorial Bell Tower early Sunday Morning.

Those responsible with positioning the Lord of the Ring’s Eye of Sauron replica on the McFarland Memorial Bell Tower remain unknown, said Skip Frost, acting Assistant Chief of University Police.

“Apparently some big Lord of the Ring fans hoisted it up there,” said Frost. “It’s actually pretty cute.”

No damage was done to the tower itself.

‘Sauron’ is the name of the principal antagonist in The Lord of the Rings series.

“We’re taking advantage of our patrol resources and watching over the area,” said Frost. “Someone getting the eye up there is a dangerous task, and we’re always making sure that students are in safe hands. It’s a construction area, and our main goal is to make this campus secure.”