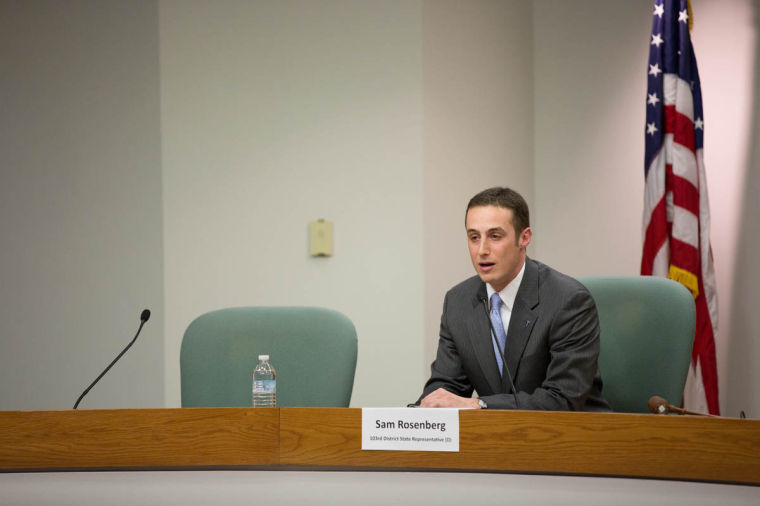 Although this is the first time 28-year-old Sam Rosenberg has run for public office, he has served the Champaign-Urbana community through his law career. After graduating from the University of Illinois’ College of Law in 2010, he was offered a job by Julia Rietz, a former professor of his and the state’s attorney for Champaign County.

As an assistant state’s attorney, Rosenberg prosecuted DUIs and domestic violence but also worked on a variety of cases becausue of the office’s smaller size. He now works for a law firm in downtown Champaign, although he is currently on a leave of absence so he can campaign full-time.

“Nothing in Champaign County can prepare one for the experience that is Springfield politics,” Rosenberg said. “Being a prosecutor allows me to see not only where laws are applied, in the truest sense of the administration of justice, but additionally it requires you to work with a variety of individuals and apply the laws to people who do not see the situation from the same perspective as you do.”

He has received endorsements from local leaders, like current representative Naomi Jakobsson, Urbana Mayor Laurel Prussing and Champaign Mayor Don Gerard. He noted a comment Rietz had made in regards to him earning the endorsement of Prussing and Jakobsson.

“Julia said she had the ability to see my judgement, to see my work ethic when I was working for her, and that’s why she did not hesitate to endorse me when I announced my candidacy,” Rosenberg said. “While I haven’t worked in Springfield, and while I am not a politician by any means, I am being supported by those … who do understand Springfield.”

Both Prussing and Jakobsson said they saw Rosenberg as a candidate who would work well with members of the House to benefit the state.

“We endorsed Sam Rosenberg because we think he’s the best qualified candidate and this is based on reviewing what the qualifications are,” Jakobsson said, with Prussing adding that “issues change but your philosophy of respect for other people is the underlying principle that you have to live by.”

Gerard said he appreciated his vision of the future and dedication to serve the community.

“When I hear him talk, there’s very little about Sam and a lot about this area and how he can be a part of the team that does things to make everything better,” he said. “He knows the game already, he’s far ahead of his years, and he got me excited. He’s a young person who’s passionate, who wants to serve.”

Regarding jobs, Rosenberg said a representative should work tirelessly to recruit businesses to his district. He used Chattanooga, Tenn., as an example of such creativity, citing an incentive program it currently has in place meant to attract businesses. He added that a tax code reform — in regards to both corporate and personal tax rates — would “make jobs and the business environment in Illinois much more amenable to new and dynamic corporation.”

Rosenberg’s support of the University involves making sure it gets the necessary funding to expand its programs and lowering the cost of tuition. There are also statutory restrictions that prevent the University from receiving profits from patents that come out of its laboratories, and he said that must be changed so the University can continue to grow.

He added that education also ties into the issue of job creation, which he has discussed with supporters like the AFL-CIO and other union groups.

“They recognize the need to reach out into communities and to develop the trades for the next generation, to develop talent amongst young individuals who may not want (or be able) to go to college, and yet still have good-paying jobs through appropriate educational means,” he said. “How are we going to be expecting to grow, how are we going to be attracting great and dynamic businesses to this community if our schools are not top-notch?”

Rosenberg sees a lot of potential in the Champaign-Urbana community.

“This is a district that I’ve fallen in love with,” he said. “This is a district that deserves and needs strong representation in Springfield. We need somebody who’s going to stand up for the values that are important for Champaign-Urbana and help us become the really fantastic community that many of us already know we can be.”

Eleanor can be reached at [email protected] and @eleanor__black.