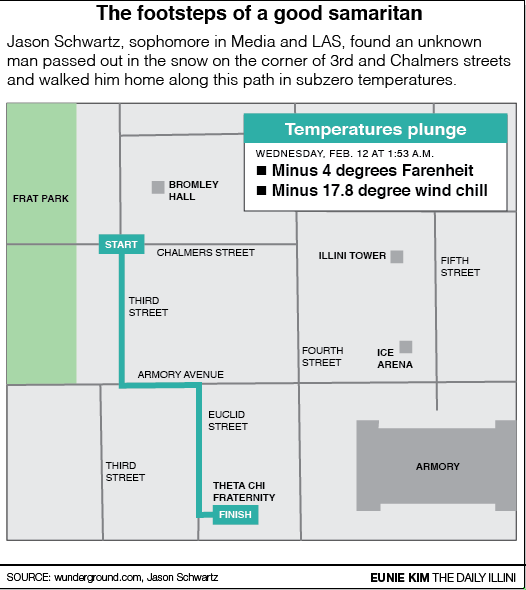 On clear nights, the starry sky can be seen well while lying flat on the ground and admiring the view. But when the temperature is below zero and powdery snow cradles the head instead of green grass, the scene can be life-threateningly peaceful.

At about that time, Jason Schwartz, sophomore in LAS and Media, was walking home with his friend, Anna Whelan. The campus was empty until they reached the corner of 3rd and Chalmers streets. There, they came upon a man passed out in the snow wearing nothing but a flannel and jeans, Schwartz said.

He remembered the recent story he’d heard about the student who officials believe may have frozen to death near the Illinois State University campus, so he knew he had to do something so this man didn’t meet the same fate, Schwartz said.

He could not tell how long he had been laying there, in snow angel position, but his face was red from exposure, and snow covered his hair, face and pant legs, he said.

“I went over there and sort of woke him up and I was like ‘Hey, are you okay?’ and he didn’t really respond, he sort of muttered a few words,” Schwartz said.

The man said he lived in the Theta Chi fraternity house, so Schwartz helped him off the ground and, with the help of Whelan, started walking him home. Schwartz said he figured the man was very drunk. When they got him to stand, he could barely walk and Schwartz and Whelan supported him.

As they walked, the man complained that his face felt numb but didn’t complain of any other injuries.

When they reached Theta Chi, about a four minute walk, they opened the door to find no one was around, so they took the man upstairs and made sure he got to his room.

Schwartz said the man thanked him a couple of times, saying, “You really didn’t have to do this.”

In an earlier interview, Illinois State Climatologist Jim Angel said with such cold temperatures, a person could “get into serious trouble pretty quickly.”

“You could start to get cold in a matter of minutes, especially if you are underdressed,” he said. “You can very easily get in a situation where you get hypothermia and your body temperature drops.”

Eric Snodgrass, director of undergraduate studies for the department of atmospheric sciences said in an earlier interview that exposed skin at such cold temperatures can freeze in five minutes, possibly leading to frostbite and hypothermia.

Along with the ISU student Schwartz remembered, a Southern Illinois University student was found dead in a wooded area this month. Police believe that a combination of low temperature and rough terrain may have prevented him from finding his way out, but an exact cause of death has yet to be determined. His body, covered by only jeans and a t-shirt, was found in the wooded area after he had been missing for a week.

Tragedies such as these point toward the need for extra precautions during the winter months. Alex Shadid, freshman in DGS and pace chairwoman of Gamma Phi Beta, said she wanted to raise awareness within her sorority about how to stay safe and warm during the extremely cold weather.

“When you go out and drink, you feel very warm so people are like, ‘I don’t need my coat, I can just go to the bar, and it’s fine,’ but (drinking) actually drops your internal body temperature,” Shadid said.

She also said she told her sorority sisters that exposed skin can become frostbitten quickly. Even though it is not popular, Shadid recommended them to take their coats when they go out at night.

She said the girls seemed responsive and took the information to heart. After her presentation, she said some of the girls joked with her about not bringing their coats out, but they brought them, so she was glad she could make a difference.

Anything could have happened that night, but Schwartz isn’t sure he saved the man’s life. He said he told friends of his adventure the next day, and they congratulated him and said that the man would have been in really big trouble without Schwartz’s help.

But he isn’t so sure.

Even the friend with him that night said they might have saved his life to which Schwartz responded, “Oh, I don’t know.”

“I like to think someone else would’ve come along,” Schwartz said, “But, I mean, I’m glad I could help him out.”

In retrospect, he said he could have stopped in and asked one of the other brothers for the name of the unknown man but he just wanted to get in and get out as soon as he knew he was safe.

This isn’t the first time Schwartz has helped someone in their time of need. On a Friday night a few weeks before this incident, Schwartz said he was walking home at about 9 p.m. from studying.

“I just saw this girl who asked if I knew where this place was, and she was like ‘Okay, can you take me there?’ and I said sure just because she was having trouble walking, so I just walked her to this place and I helped her find it,” he said.

He said he doesn’t usually pick random people up off the street but “(I) help drunk people find their way home.”

Inside the Theta Chi house, the unknown man can rest in his bed surrounded by insulated walls, knowing he is safe and sound thanks to the warm heart who brought him home and saved him from the cold.