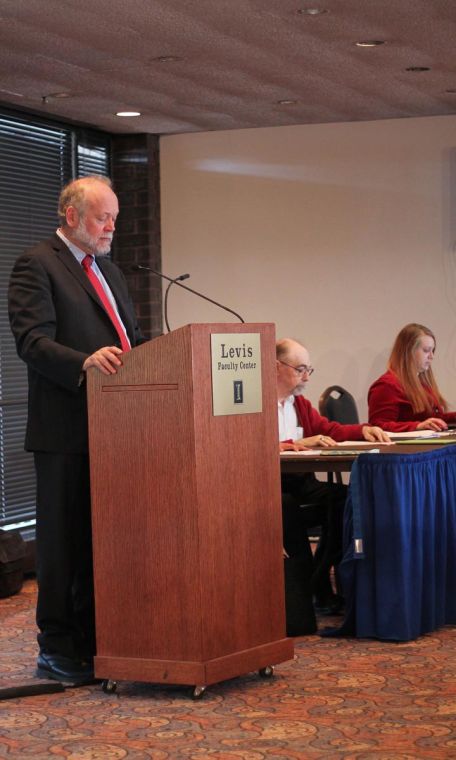 The Urbana-Champaign Senate meeting, which took place in the Levis Faculty Center, addressed important issues concerning the search for the next University president.

Following the announcement of the creation of a Presidential Search Committee that will be charged with finding potential replacements for University President Robert Easter after he retires on June 30, 2015.

“What we are trying to do is find the best candidates to do this search correctly,” said Senate Executive Committee Chairman Roy Campbell. “Previous experience is very valuable.”

“We are following what precedents have been set from the Chancellor’s search committee,” Campbell said. “I hope this meets all (faculty) needs for input.”

Executive Vice Provost Barbara Wilson began the discussion by reintroducing the Provost’s Communication and describing how the provost office has worked since 2011 with a number of deans, human resources representatives and a variety of faculty to construct the set of guiding principles for non-tenure track, or as they are described now, specialized faculty. The Provost’s communication was brought to the Senate for the first time at its February meeting, but senators failed to approve the communication because they did not meet quorum at the time of the vote.

“I don’t think we did a particularly good job last time of helping give the historical context of this process,” Wilson said. “We had a really robust conversation here and we have done some things since then in response to your feedback.”

When the document failed to pass the Senate, Wilson and her colleagues created a survey to ask all non-tenure track faculty what they would prefer to be called. Thirty-three percent responded to the survey and 29 percent of those who voted favored the term “specialized faculty,” which signified that term as the winner.

Senators also discussed ways in which to strengthen and clarify the Provost Communication.

“I think the changes have been for the better,” said FAA professor David O’Brien. “Essentially what this does is change a few ‘shoulds’ to ‘shalls.’ While these principles are good, I think they can be stronger. They [O’Brien’s colleagues] didn’t believe that this was the kind of strong wording that would change policies.”

Engineering professor Phil Geil also suggested making changes to the way the principles were phrased, saying that the document should make clear that specialized faculty were hired to satisfy one of three University missions: teaching, research or service. Other senate members disagreed on whether that point should be added to the document.

“Although these positions involve areas of emphasis, I almost have the inverse reaction: that contributing to one or more would make the factors completely separable,” said LAS professor John Randolph.

The resolution was passed after senators voted to amend the “shoulds” to “shalls” and leave out the point that stated the individual missions of specialized faculty.

Proposed revision of election rules for the student electorate

The University Statutes and Senate Procedures committee proposed a plan to revise the Election Rules for the Student Electorate, which led to debate between student senators, graduate student senators and faculty senators.

This year, the Graduate and Professional Student Affairs committee, which was in charge of selecting a replacement graduate student senator, was not selected by the Student Body President.

William Maher, University Statutes and Senate Procedures Committee chair, described how his committee created the proposal because the Illinois Student Senate had allowed the vacancy to go on and not because they desired more oversight into student senate elections.

“What is in this proposal here is for the USSP and its responsibility to step in and take care of things when they are not taken care of,” Maher said. “I think that the fear that the committee itself would overstep its bounds and try to control the composition of the graduate students in the senate is exaggerated.”

“Our fear is why, all of a sudden, does USSP have vested interest in overseeing this one aspect of the Illinois Student Senate?” Bolden asked. “I think it would be better fitting to replace USSP with the CSEC, the Campus Student Election Committee, to be the next go-to if the (Graduate and Professional Student Affairs committee) is not formed.”

Resolution for Support of Women in Engineering

Senator Harry Hilton presented the Resolution for Support of Women in Engineering, which asked the University to encourage female engineers by provide funds for a female statue on the Bardeen Quad similar to the statue, “Grainger Bob,” which sits outside of Grainger Engineering Library.

Sakshi Srivastava, junior in engineering and the student who initiated this movement, spoke to the senate about the importance of female representation on the engineering campus.

The meeting was concluded with Faculty and Staff Benefits committee chair John Kindt’s presentation on current benefits issues, many of which are the result of the recent pension legislation.

“People should realize that practically everyone in the state who is a public employee or teacher will lose thousands, if not tens of thousands of dollars under the pension reduction act,” Kindt said.

Kindt emphasized that the courts could still throw out the pension legislation — so far, five cases have been filed against it.

“The Illinois courts are traditionally very slow at addressing these cases,” Kindt said. “In Arizona, a similar case was decided in favor of the public employees.”

Meanwhile, the State Universities Retirement System has been hosting on-campus sessions for faculty members that need to discuss their future financial situation in light of pending pension legislation, Kindt said.