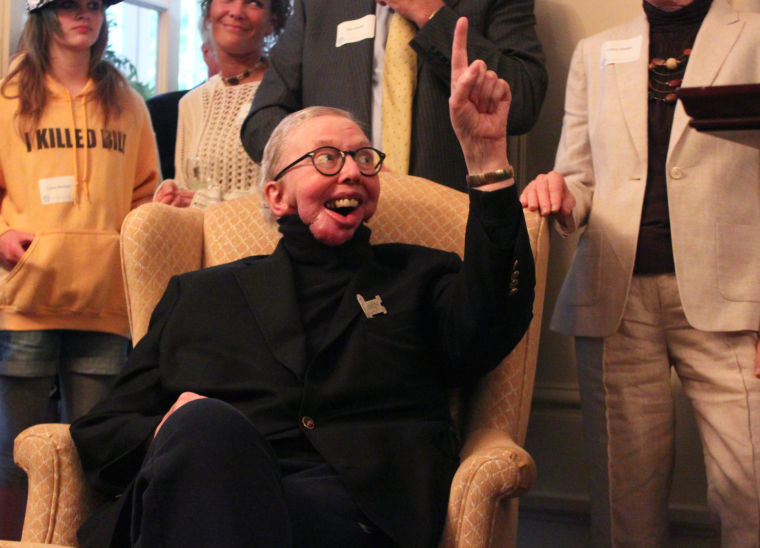 Roger Ebert raises his hand to interject during his wife Chaz Hammelsmith Ebert's (not pictured) speech at the Ebertfest Opening Night Gala at the President's House on Wednesday, April 25, 2012.

This will be the 16th annual Ebertfest and the second since founder Ebert’s passing. The movie festival will screen Oliver Stone’s “Born on the Fourth of July,” Steve James’ Ebert documentary “Life Itself” and “Young Adult,” starring Charlize Theron and Patton Oswalt.

“We’re just thrilled and honored that they are all coming,” said Mary Susan Britt, associate festival director. “It’s absolutely going to be spectacular but also very special with ‘Life Itself’ because that movie is based off Roger.”

It will take place April 23-27 at The Virginia Theatre. The films are selected by Chaz Ebert and Nate Kohn, festival director. They review a list of movies Roger wanted at the festival that might not have been screened earlier because of scheduling conflicts. Then, they select newer films as well ones based off Ebert’s preferences.

“We most definitely keep everything the same and that’s from day 1 when Roger started this festival,” Britt said. “We’re keeping his same vision and furthering his vision of champion worthy filmmakers and films.”

Chaz Ebert, Roger’s wife, announced that Spike Lee, director, will be in attendance on her blog. Lee will showcase his film “Do the Right Thing,” which will be part of a special 25th anniversary screening.