Research looks to incorporate next wave of flexible technology 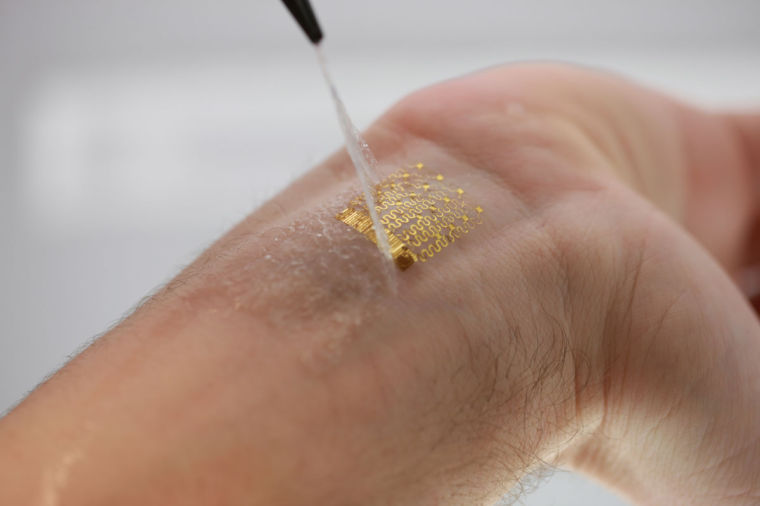 The flexible technology acts similarly to a child’s temporary tattoo and adheres to the user’s skin. John Rogers, professor of materials science and engineering, said his team is interested in working with electronics beyond the capabilities of what current technology that devices use.

John Rogers, professor of materials science and engineering, said his team is interested in working with electronics that lie beyond what is possible with the current technology. Rogers said they want to make devices that have similar traits to the human body, such as thinness, softness and flexibility.

“It turns out the skin is a great window into the health of an individual,” Rogers said.

He said the devices are like a child’s temporary tattoo — they rest on the skin, are hardly noticeable and do not irritate the skin. The device gives precise, hospital-like assessments of a patient’s health. The patch will then send the data to a home base, usually a smartphone, and can be viewed from there. He said this could be useful in sports, home and clinical medicine.

“It’s like a portable hospital in a skin patch,” he said.

Rogers said they work closely with MC10, the main company that is working to commercialize this technology with businesses such as Reebok, L’Oreal and Walgreen Co. A product to be worn on the user’s skin will soon be released with the collaboration of L’Oreal that measures the amount of sun rays the body is exposed to and alerts the wearer before a sunburn occurs, he said.

Reebok released an athletic product in the summer that is incorporated into a skull cap under helmets, Rogers said. The device can measure the force of a head impact, then one of three colors will light up to show the severity of the hit. It has the added capability of keeping track of the number and severity of hits an athlete receives throughout the entire season.

Rogers said they are most interested in the medicinal use of the research because of its potential for societal impact. It is also applicable to industrial and commercial use, he said, and he is sure that these other purposes will come about in time.

Chad Webb, researcher and graduate student in materials science and engineering, said this technology helps focus health care at home, allowing patients to send large amounts of information to their doctors without an appointment.

Webb’s research is focused on mapping temperature on the skin, he said. His devices’ main area of use examines if there is a relationship between the data collected and different medical conditions. He said researchers can use this technology to research skin disease and breast cancer, areas that have been difficult to look at before.

L’Oreal is interested in using Webb’s research to create a device that can detect skin diseases noninvasively and diagnose the level of treatment required.

Howard Liu, doctoral candidate in materials science and engineering, said devices placed on the skin can get more accurate results with less interference than other devices. He said this technology works in real time and can be used not only to control drones wirelessly but also to control prosthetic limbs. The military could use the technology to keep soldiers safe by sending in drones to dangerous areas to perform tasks, such as disarming bombs.

Canan Dagdeviren, researcher and graduate student in materials sciences and engineering, said she is looking at using this technology for blood pressure monitors and implant management.

She said that when the device material is worn, it feels just like another layer of skin and that her devices monitor blood pressure more accurately than the standard cuff because they adhere to the skin.

She also emphasized her devices’ high degree of being able to be customized, which current technology lacks. The new technology can form to a specific person’s skin and better monitor their health.

Dagdeviren tested her devices on patients and achieved good results. The doctors involved were excited about the timeliness of the results for their patients, she said. The devices are time- and lifesaving because the results are so quick and current; thus, action can be taken if need be, she said.

“I show them the results and (the patients) become so excited, and even the doctors are getting excited,” she said, because it is “easy to explain, and for them to use and share with their patients right away.”

The research is in varying stages — some products are used currently, but others will not be ready for seven years.

Overall, Rogers said, “We are hopeful that some of the technologies will have a real impact on the way clinical medicine is done and the way that people think about biomedical devices.”