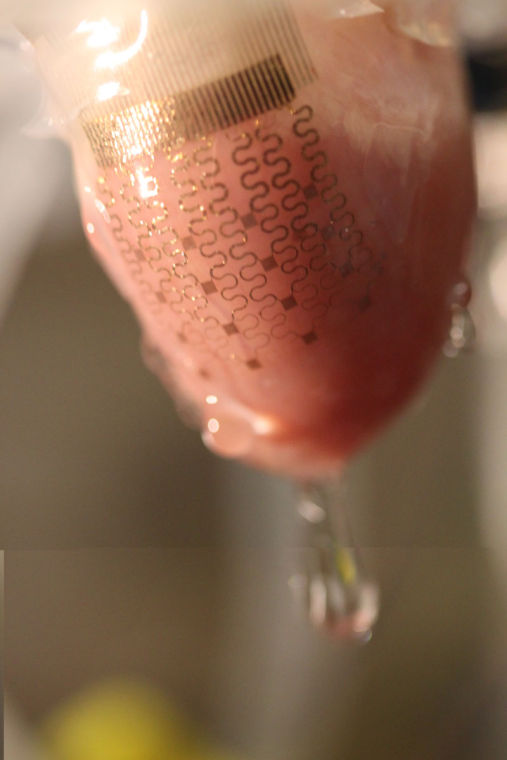 Researchers at the University of Illinois at Urbana-Champaign and at Washington University in St. Louis have developed a device that could one day save human lives by preventing heart attacks.

Current technology on the market to treat irregular heart beats include pacemakers and defibrillators, devices that are implanted and apply therapeutic electrical shocks to correct the heart’s rhythm.

“The way that they do the electrical mapping is pretty primitive,” said John Rogers, co-leader of the University’s research team involved in the project and professor of materials science and engineering.

Igor Efimov, leader of Washington University’s research team and professor in the department of biomedical engineering, said existing technology gathers information from basically a single spot on the heart and limits doctors to making decisions in therapy based on information from that one spot.

While existing technology maps the heart’s electrical activity in a point-by-point fashion, the device the team developed is equipped with many more electrodes and fits over the entire surface of the heart, allowing it to make contact with and monitor more points on the vital organ.

“What we’re saying is if you can go from single point to very large numbers of independently addressable points … then you can improve — qualitatively — the sophistication with which you’re electrically interacting with the heart,” Rogers said.

“A device that is being developed for any cardiac application needs to contract and change shape with every heart beat,” Efimov said. “In fact, one of the major problems with technology that’s currently on the market … is failure of electrodes due to this constant flexion … over a very long period of time.”

The “sock” — as Rogers called it — that the team invented was created using a 3D printer. He said this is the first time they’ve made something that adopts the full 3D shape of the targeted organ and that it enables interaction, measurement and stimulation across the organ’s entire surface. It is currently being tested on a rabbit’s removed heart.

The mechanism’s various sensors and wires are arranged in a mesh configuration that will not reduce the sock’s overall elasticity.

“We’ve been working for a while on the topic of how you can better integrate … the kinds of things that you find in the consumer electronics world with the human body, with the idea that if you could do that in a more effective way then … it could advance the art in human health care,” he said. “It’s kind of in that broader context of, ‘How do you monitor the behavior of the heart while it’s beating?’ that this particular project kind of grew up.”

Still, there is a lot of work to be done.

Michael Brottman, a University alum and cardiologist at Elmhurst Hospital who was not involved in the project, expressed several practical concerns about the apparatus.

Coronary arteries are located on the outside surface of the heart. If surgeons needed to do a bypass surgery, Brottman said he thought the sock might get in the way.

Brottman also said it was unclear how the monitoring of different biochemical reactions in the heart would translate to actually preventing heart attacks.

“The concept of this thing — to test the metabolics of the heart and the rhythm — in theory sounds great,” he said. “However, I feel that, in the reality of testing, there are many unanswered questions.”

Rogers said that at this point preventing heart attacks is an ambition of the team’s, as the device hasn’t actually been implemented to prevent an attack.

“That’s a possibility we think has been made available by these capabilities but it has not been demonstrated at that level,” he said.

The idea is that the apparatus would pick up on unusual patterns of electrical activity and other indicators before the heart attack actually manifests itself and then would apply treatment to get the heart’s beat back on track.

Brottman also questioned how the invention would be powered.

The group is exploring how to power the mechanism once it’s in clinical use, as it’s currently powered externally. Batteries wouldn’t work since they’re still large and have a finite lifetime. The vision, Rogers said, is to eventually integrate everything onto the sock so that it can be self-powering.

Rogers said he is pleased with the project’s progress so far, and that it provides a foundation for thinking about how to integrate devices with the heart in ways that haven’t been possible before.

He estimates that the device is 10 to 15 years away from being made available to humans due to rigorous testing requirements. The next step, he said, is to test the device in living, freely-moving animals.

“I definitely think there’s some potential in it,” Brottman said. “We need to keep an open mind on all technology. Something like this could end up finding a therapeutic niche for treating some form of heart disease. Only time will tell.”

Steffie can be reached at [email protected]