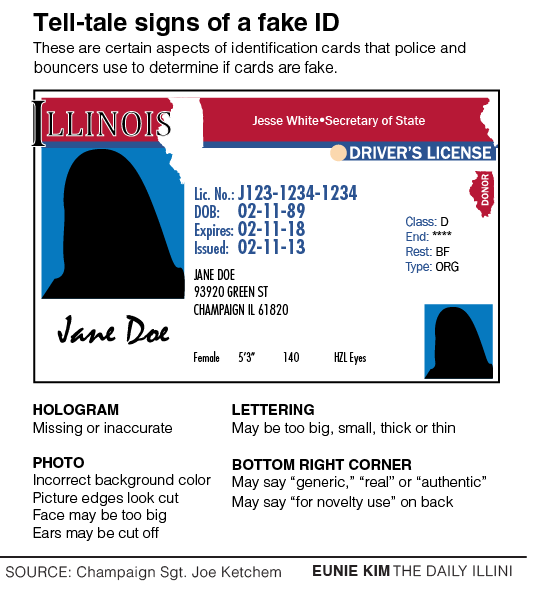 Editor’s note: The name of a student who uses a fake ID was changed in this story to protect her identity.

Before Mallory came to school, her sister offered her this advice about going to bars: Bouncers are going to know your ID is fake. It’s their job to decide whether they want to let you in or not.

Fake IDs like Mallory’s are a problem for local police.

“I don’t know if it’s peer pressure, I don’t know if it’s the need to go along or what it is, but obviously (students aren’t) thinking about the long run,” said Champaign Police Sgt. Joe Ketchem. “To them, I’m sure it seems like, ‘Hey, I can’t get caught, it’s not a big deal.’”

According to reports obtained from the Champaign and Urbana police departments, Champaign police confiscated 23 fake IDs in 2010, which fell to 16 confiscated fakes in 2011 and then jumped to 233 the following year. In 2013, 138 fake IDs were confiscated by Champaign police. Due to a lower number of bars, Urbana hasn’t confiscated more than four fake IDs per year between 2008 and now, for a total of nine.

Determining if an ID is fake or if someone is using someone else’s ID is a task that doesn’t require any experience, University Police Chief Skip Frost said.

Between 2008 and now, UIPD saw 11 reports of false ID possession, 40 confiscations of fraudulent IDs and 236 confiscations of IDs being used by someone other than the owner, according to a document obtained from UIPD.

”It’s like a dollar bill,” Frost said. “You can hold a dollar bill up to light and, not having the experience, you can say, ‘Well this doesn’t feel right, it doesn’t look right.’ That’s the first dead giveaway.”

Many students use IDs with descriptions that don’t match their own. For example, a student who is 5’6, 140 pounds and has blue eyes will use the ID of a person who is 6’2, 220 pounds and has brown eyes, Frost said.

“It’s amazing how people will continue to try to perpetuate, ‘That’s me, that’s me,’ and you know full well by looking at it that it’s not,” he said. “We’re police officers. We’re generally pretty inquisitive people, and we pay attention to such things.”

Frost has also seen cases where students open their wallets to reveal three different driver’s licenses, one of which is their own.

“The bottom line is, if it’s not you and we can see it’s not you, you’re not doing yourself any favors by continuing to not tell the truth about it,” Frost said.

Ketchem said all ID misuse is typically treated as a city fine and many times does not lead to imprisonment. Instead, in Champaign, the offender would receive a $330 fine, the ID is then sent to the Secretary of State’s Office and the user’s license can possibly be suspended for a year.

“You don’t have any constitutional right to get behind a wheel and drive a car — it’s a privilege in the state of Illinois,” Ketchem said. “Part of that privilege is you should not get a fake ID with your picture on it and with your name on it.”

For people using someone else’s ID, they and the owner are subject to the same criminal action, Frost said. If an ID is lost or stolen and then used, it is up to the Secretary of State to decide how to move forward with the case.

Mallory said she has used two fake IDs, both of which were found on the floors of bars by her friends.

“Obviously (bouncers are) not dumb,” she said. “The picture isn’t the same as the person who’s giving it to them. But I feel like most of the time they let you in.”

While Mallory uses a fake ID less than once a week, she has had an ID get confiscated at The Highdive in Champaign and said she gets worried when she sees bouncers looking closer at IDs. She worries about losing her license, getting a drinking ticket, getting arrested and having the charge recorded on her record.

Dozens of websites offer illegally made IDs that students can put their picture and, normally, fake information on. Ketchem said they typically offer deals, such as two for $100, and that the most popular website used by University students was IDChief.com before it had been shut down.

“Most of these websites, I’d say probably more than 75 percent of them, are in China or overseas,” he said. “A couple senators sent a letter to the Chinese government asking them to shut this website down, but now it’s opened up underneath another name.”

Ketchem said that new technology is making better quality fraudulent IDs that are harder to detect.

“Before, the usual fake ID would be made in a dorm room on a computer with laminating paper,” Ketchem said. “Now you can simply send your picture to these companies and they produce the ID using better computers and comparable paper.”

Frost said the police are aware that students on campus are creating and selling IDs as well.

Mallory said she doesn’t know anyone at the University who uses websites, but some of her friends in other colleges buy fakes online to buy alcohol.

“It doesn’t make any difference when the fake ID was given,” Ketchem said. “You have the right to an administrative hearing, but you need to come in and explain why your picture, name and information were on a fake ID.”

Even if fake IDs are found years after they were created and used, students still run the risk of being charged. Cops will match the ID with the user’s real driver’s license and then notify the DMV, which automatically suspends their license no matter the time lapse, even if the user in question is now 21.

“We do some ID details during the school year with different bars that are cooperating with us, trying to get rid of this problem,” he said. “We’ll be in the bars as they are checking the IDs, trying to see if one’s fake or misused. They’ll let us know and we come over.”

Yet police are unsure of the motives behind students continuing to use fakes.

“I don’t know what else to tell them,” Ketchem said. “We put all the information out there. They’re adults and they’re making the adult decision whether to do this or not.”