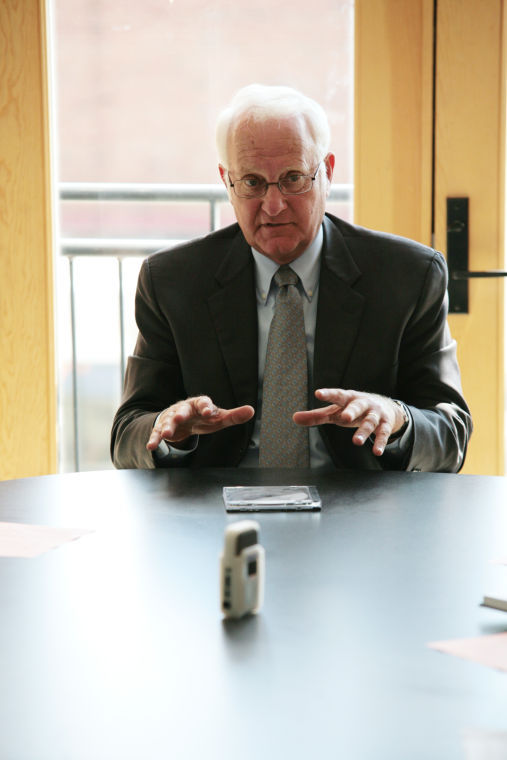 Then-Interim Chancellor Robert Easter talks with members of the Daily Illini editorial staff in the Illini Media Building on Aug. 26, 2010.

The Urbana-Champaign Senate and the Illinois Student Senate have nominated six faculty members and four students to fill positions on the Presidential Search Committee, charged with finding presidential candidates to replace University President Robert Easter when he retires on June 30, 2015.

Of the six faculty members, three faculty representatives will be selected by the University Board of Trustees to serve on the Presidential Search Committee. The Vice Chancellor of Student Affairs will select one student.

“This is another example of shared governance,” said University spokesman Tom Hardy. “There are policies and practices in place to guide how this was done. It will be comprised of representatives from the various constituencies (of the University).”

“I saw this as a very rare opportunity for students to decide a very important member of the University,” Dickey said. “We are choosing someone who will be the leader … who will outlast us.”

Wheeler said faculty and students in the search committee will help ensure that the next president has the leadership needed to make progress at the University.

“It is an important job, and it is a really great credit to the University of Illinois that faculty and students will have a role in helping determine the leadership for the future,” Wheeler said, adding that the next president should be someone who “(understands) the role of a land-grant institution and someone with a vision about how to take us forward and make us the best public institution not just in the country, but in the world.”

After a scandal that led to former University President Michael Hogan’s resignation in March 2012, a presidential search committee was not used to select Easter as president; he was instead selected by chancellors and deans after they consulted with key members of the faculty senate, Hardy said. The University has not used a presidential search committee since Hogan was selected in 2010.

“I don’t think past episodes really has anything to do with or reflects on the advisory search committees or the work they performed,” Hardy said. “Everyone who is a part of this process gives a lot of their time. The fact that the presidency was vacated due to difficult circumstances is no reflection of the search committee.”

Search committee members will be responsible not only to search for presidential nominees, but also to help define the role of the next president, Campbell said.

“Our flagship campus has some really strategic goals that we need to satisfy,” Campbell said. “(The University presidential candidates) must maintain educational excellence, and maintain a presence in Springfield and coordinate our campuses under budget constraints.”

Campbell said that any of the six faculty candidates will be suited for the search committee, but it will be up to the Board of Trustees to decide which candidates will best represent the diverse constituencies within the University.

“We have a really strong set of nominations,” Campbell said. “They are going to be a really good team to help choose the president. In certain ways, we couldn’t have put a better foot forward.”

Hardy also emphasized that diversity within the selection committee would be key.

“(The Board of Trustees) will consider recommendations of potential advisory search committee members from all walks of life within the University,” Hardy said. “And obviously, students will play an important role.”