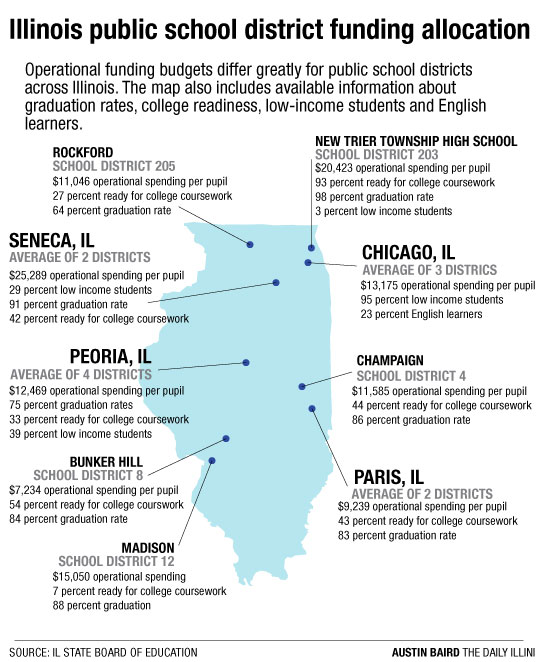 A bill is now on the Illinois Senate floor which, if successful, could completely overhaul the way the state funds public education, distributing money to school districts based on need.

State Sen. Andy Manar, D-48, is the primary sponsor of Senate Bill 16 or the School Funding Reform Act of 2014. He and a group of other legislators introduced the bill to the Illinois Senate on April 2.

The Senate Education Funding Advisory Committee released a report recommending a new formula for state funding for public schools in Illinois on Jan. 31. Manar said he felt this legislation was both a continuation of the committee’s effort, as well as something he’s been working on since he was sworn into office.

Manar said Illinois has the second least equitable public school funding system in the country. Currently, only about 44 percent of education state funding is distributed based on district need, according to Manar’s website. Manar wants to raise that figure to 92 percent. This new funding formula would be phased in over a four-year period.

Currently, the other 56 percent of state funding goes primarily to programs like special education, transportation and vocational training, according to State Sen. Michael Noland, D-22, a cosponsor of the bill.

Manar added that the 56 percent of state funding that is going toward specialized programs is distributed regardless of whether or not the district can pay for those programs independently.

“The formula would better account for the needs that school districts face today in Illinois,” Manar said. “Currently, the formula that we use today was created in 1997, the state has changed dramatically since 1997, but the funding formula has not.”

Noland emphasized that student access to education should not be dependent on geographic location.

“It’s rather cliche by now, but the quality of your education should not be dependent on your zip code, or your area code, and where you live in the state of Illinois,” Noland said. “We should have equitable funding for education, need-based funding throughout the state.”

This sentiment was echoed by Jaclyn Gelfond, president of Illini Democrats and junior in LAS.

Max Balkan, vice president of Illini Republicans and junior in Business, said this bill is a step in the right direction, though he is concerned that it won’t be enough.

“There is much more than basic state funding that (is) necessary for schools to be successful including parental involvement, dedicated teachers, and local support, which needs more than just legislation,” Balkan said in an email.

Evan Keller, the reporting director for Illini Democrats and freshman in LAS, said these inequalities between wealthy and poorer school districts are apparent within the population of the University.

“Downstate students are very underrepresented as well as inner city kids,” Keller said. “That’s a direct product of the funding allocations that haven’t been changed since 1997.”

He and Balkan both acknowledged that the bill has gained bipartisan support.

Mary Fergus, a spokesperson for the Illinois State Board of Education, commented on the board’s support for the bill.

“The Board of Education has been working to look at ways to make funding more equitable in Illinois,” Fergus said. “And it’s especially important right now, because we’ve seen cuts to education funding over the last few years due to the recession … The board has met this week and said that they support SB 16, at least in policy.”

Noland said that if successful, this bill could more equally distribute wealth and could ultimately have a positive ripple effect on higher education.

Gelfond also commented on the possible positive effects that this legislation could have on potential student access to the University.

“I think for a lot of students, if you grow up in an area where schools aren’t well funded, so the education you get from K-8 isn’t good, you have definitely less of a shot of getting into a school like the University of Illinois,” she said, “And I think if you do get that better education off the bat, then it will give students a better chance.”

The Chicago Public School district is an example of the unequal distribution of state education funding.

A large component of the bill is eliminating the Chicago Block Grant by absorbing its funding into the new formula. The grant allows the Chicago Public Schools to receive significantly more funding then would be possible otherwise.

The Chicago Block Grant aspect of the proposal has received significant attention, some of which is negative, but Manar said he thought it would be a disservice to the legislation not to include it in the proposal.

State Sen. Kimberly Lightford, D-4, spoke to the decision to eliminate the Chicago Block Grant in the bill.

“CPS came to testify and they were not opposed to the elimination of the block grant, recognizing that our comprehensive plan and our bottom line goal is to make sure that funding is distributed fairly … across the state,” Lightford said.

Sponsors of this formula hope that, if successful, it will work to create more equal educational opportunities between students in poor and wealthy districts.