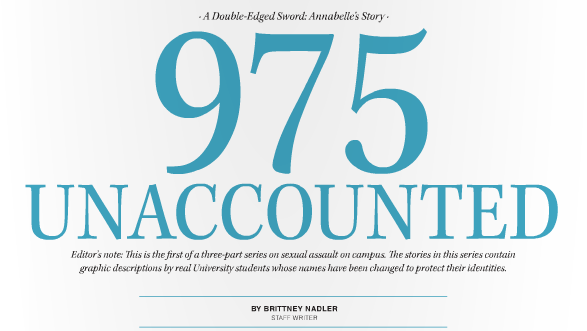 In her mind, having sex with her ex would bring him back.

It happened three months after Annabelle, a 17-year-old senior in high school, and her boyfriend, Nick, had broken up. She had been having sex with him because he said it was how she could prove her love to him. In reality, as she would later find out, he was also sleeping with other girls.

One night while hooking up in her car, Annabelle brought up the idea of getting back together. But Nick said she would never be anything but a trophy wife, more of a girl that guys like to toss around until they get bored — a slut.

At that moment, she realized what she was doing and that Nick didn’t actually care about her. She began to turn away and told him to leave her alone — but he had a different plan.

“Don’t you like that?” he whispered in her ear.

She screamed “Stop!” and he said it again. He told her to shut up while she cried and yelled. She eventually gave up, staring at the top of the car, waiting for him to finish. She then dressed in silence.

She stared blankly at the streetlights as she drove him home. He tried to hold her hand and kiss her good night, but she rejected him.

“Thanks for that. I really enjoyed your special treat,” Nick said to her when he left.

Annabelle went home that night, keeping quiet about what had happened. She would endure the next six months carrying the burden of that secret. She didn’t go out, and she pretended nothing happened between her and Nick. She stayed in her room at night, alone, crying, and when it all became too much, she stepped in front of a car that “luckily stopped.”

Annabelle spent extra time at her local pool and with her best friend. She went to work. She began personal therapy. One day, she even told Nick she forgave him.

But she never reported him.

Annabelle is part of the majority. Most sexual assaults go unreported for a variety of reasons. Many survivors don’t realize their attack is an assault. Many don’t wish to report the crime, and others don’t want to carry on with the investigation after reporting it.

Overall, that adds up to 987 sexual assaults per year, 975 more than the reported number.

Every year, Rape Advocacy, Counseling and Education Services, or RACES, takes nearly 200 crisis calls, sees between 30 to 40 survivors and provides counseling and advocacy to about 130 people.

True-Funk said RACES advocates don’t report the calls to the police or to the University because the hotline they run is confidential and anonymous.

Victims may not think to report the assault immediately after it occurs, said Megan Pagel, FYCARE instructor and graduate student.

“It might not even be something they’re thinking about at that time shortly afterwards,” Pagel said. “Then if they do realize it later down the line, they just figure it happened a while ago, what’s the point now?”

Annabelle didn’t report her attack. Describing herself as a justice-oriented person, she said sending Nick to jail would put him at risk of being sexually assaulted.

“I didn’t report it because I could never ruin someone’s life like that,” she said.

Before actually reporting a sexual assault, coming to terms with being labeled as a victim and possibly being perceived as weak, vulnerable and exploited can be enough to steer survivors away from filing charges, said Rick Stejskal, FYCARE instructor and graduate student. Instead of using the label “victim,” a better term to use is survivor. It provides empowerment and doesn’t diminish the person.

“Just the word ‘victim’ in general is a very loaded word,” he said.

Annabelle is familiar with the generalizations.

“There’s a very big stereotype that people who get raped are stupid and ‘rape will never happen to me,’” she said, “and I guess people are embarrassed about it.”

Many survivors of sexual assault know the perpetrator, making it extremely difficult for them to report the assault. Acquaintance rape is the most common type of rape, as 75 to 80 percent of all victims report knowing the perpetrator, True-Funk said.

“When you’re dealing with neighbors, friends, dating partners, classmates, it can become a lot more complicated to report to an authority figure that the person that assaulted you is someone you willingly let into your dorm room or you willingly went to a party with,” she said.

A few months after the attack, Nick texted Annabelle asking if they could be friends.

“I completely exploded on him, saying left and right how horrible he was and how he treated me like shit,” she said. “It felt pretty good.”

But she knew exploding at him over text wouldn’t solve anything — it actually made her feel worse. Annabelle looked up counseling centers at his college and told him “he might want to look into it.”

“That’s when I decided to try and tell my dad what happened,” she said.

She pulled him aside that night and said it simply: She had been raped. But her father, who always liked Nick, looked at her and said he didn’t believe her — that it was probably her fault.

Her brother had a different reaction. He was mad at her for not reporting it.

“He screamed at me,” she said. “He felt it would be my responsibility if someone got raped by the same guy.”

The most common sexual assault reports to police are attacks by strangers, McLay said. Reporting someone you know means that others in your life are likely to also know that person.

“I’ve heard many survivors say that when they shared it with someone who cared about them, they treated them differently,” McLay said. “Either they didn’t want to talk about it or they minimized the whole experience. Or they treated them like they were fragile and broken, and both of those things can be very harmful.”

To this day, Annabelle’s parents pretend it never happened. They know what Nick did but still insist it was Annabelle’s fault. Her mother doesn’t talk about it.

Annabelle did seek counseling, but she never brought up the rape. Instead, she confided in her best friend, Cassie.

“I kept silent about it until the night of prom. I was terrified that my date would try to hook up with me, so I had been avoiding him all night,” Annabelle said.

Cassie noticed her acting strange and pulled her aside. Annabelle shared everything, and Cassie revealed her own secret: She had been raped when she was 15 by one of her older brother’s friends. From then on, they were each other’s therapy, trying to help the other move on with her life. But Annabelle was brought back to the assault three months later when Nick once again texted her, explaining everything he had done to improve himself.

“I am not really sure if he has or hasn’t (improved) because I honestly do not care to ever talk to him again, but there is no part of me that regrets not prosecuting him,” she said. “I guess to me, I don’t think all parts of a person are bad.”

One day, Annabelle texted him first. “I don’t know if you even accept or believe this, but you raped me, and I want to say I forgive you.” She said it was the  most helpful part of her healing process.

Because the majority of assaults go unreported, many rapists don’t think they’ll ever get caught and are likely to attack again, McLay said. She added that about 90 percent of rapists are “serial rapists,” and only 3 percent of rapists will ever see a day in prison.

Reporting perpetrators is one way to hold them accountable for their actions, but this puts more responsibility on the survivor.

“That also enforces rape culture because rape culture says a victim is responsible for this (and) needs to do all these things and really shifts the focus off the perpetrator,” McLay said. “It’s sort of a double-edged sword.”