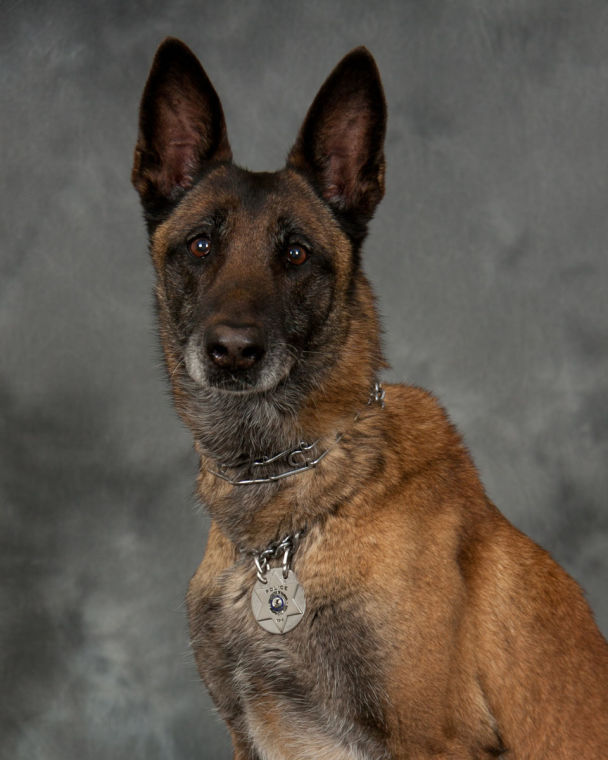 After more than 10 years of loyal service to the University, Nala, a police canine, is retiring in June. The dog specializes in explosive ordinance detection and has logged many hours securing the safety of the campus community.

Nala is a 13-year-old Belgian Malinois who originally came from Holland, Netherlands. University Police Department officer Troy Chew is part of the explosive ordinance detection unit and has been Nala’s handler for the 10 years she’s been at the station.

University Chief of Police Jeff Christensen said as part of the security team, Nala would search and sniff Memorial Stadium for hidden harmful objects before every football game. He said students who attend football games may have seen Nala because she’s there protecting them the whole game.

She would also make appearances at some State Farm Center events and whenever other high-profile individuals are on campus. She sweeps the area and indicates if she senses a threat in the building.

Chew said he and Nala will be at the Illinois Marathon this Saturday, sweeping and securing the area.

But even the best must throw in the bone sometimes.

“(Nala) has served us very well, but she is getting old, and she has some medical conditions,” Christensen said.

So now, like Nala hunts for bombs, the hunt for a new police canine is underway.

Specialized dogs like Nala are expensive because they are bred specifically and require special training.

The total cost for a new pup and updated equipment for the police department will be $14,800.

Luke Sailer, Illinois student senator and senior in LAS and Media, said the student senate had left over funds from previous assemblies and wanted to spend it on something that is really helpful for the student body as a whole.

Last week, the Illinois Student Senate passed a motion to give $7,400 to the police department toward buying a new police dog. Sailer’s initiative originally suggested giving the police department $4,000, but ultimately donated half of the total funds required for the purchase of a new animal because senators were so supportive of this cause, he said.

“Every single student is effected by the possible threat of a bomb,” said treasurer Brian Siegel, senior in Media and former Illini Media employee.

Siegel said when the police department purchased Nala, it asked for donations from around campus. He said he knows from experience that this is an exhausting process; so he thought it would be good to lift part of this pressure off by giving a donation.

For the safety of every student on campus, $7,400 is a relatively small price to pay, Siegel said.

Just having a dog present at the game is sometimes enough to deter someone from planning an attack, he said. And if some students go their four years not even knowing Nala exists, he said, that’s actually a good thing. It means there is no issue on campus — then, she is doing her job.

Part of the funding will go toward buying a new police car suitable for a canine unit. This car has added features such as a special kennel in place of the backseat to hold Nala and allow her room to move around. Police dogs being left in the car while the officer is away can be very dangerous during the summer months with high temperatures.

Another add-on is a “Hot Dog” feature which protects the dog from the heat. When the temperatures rises past a certain point, the windows roll down, a fan turns on and an alarm goes off. Chew said this alerts officers that they need to get back to the car and check on their dog.

Christensen called the donations from the Illinois Student Senate “incredible” and “absolutely amazing.”

“We are very thankful for (the money),” he said.

Christensen said he wants to get another dog as soon as possible, at least by the start of football season.

The funding for a new police canine ended up being the second largest ISS expenditure of the year, Siegel said, but for him, this initiative is the most important thing he has been a part of during his time in student government.

“(Nala’s work) is something that doesn’t affect one group of students on campus. It affects every student, every faculty member, every administrator, everyone who sets foot on our campus,” Sailer said.

Officer Chew said Nala will come live with his family when she retires which include three kids and a black lab. He said she is a very social dog so she will fit right in at home.

“(Nala) has worked hard for the last 10 years, and it’s time for her to retire and hopefully hang out for three or four years and just be a dog,” Chew said.