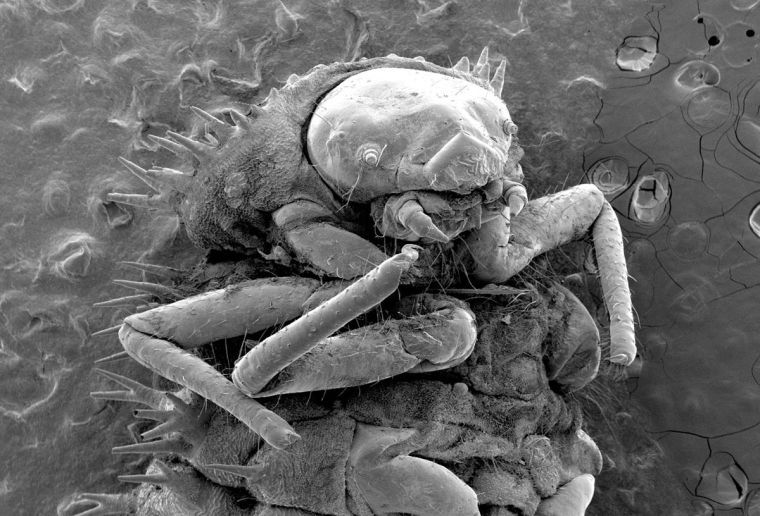 This is a ladybug larvae, a preset for the electron microscope the Bugscope Project uses. "We find the grossest stuff for the kids to see, because they like it," said Scott Robinson, Bugscope team member.

They call it “the underworld” — a corridor of windowless labs buried 23 feet below the Beckman Institute.

Here in the underworld, they house microscopes; massively expensive, research-grade microscopes that won’t be touched by anyone other than a handful of researchers, except for one — the XL 30 ESEM-FEG electron microscope.

That’s because this particular microscope is used in the Bugscope Project, which lets classrooms around the world tap into the controls and view samples of insects. So far, they’ve had over 900 sessions.

“People use this 24 hours a day for research. It’s on the calendar just like all the other instruments here,” said Bugscope team member Scott Robinson.

The team is made up of three members: Robinson, microscopist Cate Wallace and etymologist Joe Wong. Robinson and Wallace work in the underworld in the Imaging Technology Group and work Bugscope into their schedules as a free outreach program.

“I think we’re extremely fortunate to have something at this level — at this caliber — to expose the kids to technology,” he said. “Most adults in their life don’t have the chance to look at anything remotely close to an electron microscope, so to have a kid actually know what an electron microscope is at 7, 8-years-old, is pretty phenomenal.”

The three classes each had a computer where students could type out their questions while viewing presets of bugs. One student asked “Why do they call lady bugs ‘lady bugs?’” when a ladybug appeared on the stream. Wong replied.

“It’s in reference to Mary, mother of Jesus, and in Britain, they became known as Our Lady’s beetle. The proper colloquial name for ladybugs is ladybird beetle, or lady beetle,” he said.

From there, Dravland could zoom in closer on the ladybug, showing the insect’s hairs.

The kind of view the electron microscope offers isn’t possible with the typical classroom microscopes, which use light, Robinson said.

“A scanning electron microscope lets you see a sample that’s three dimensional … and you’re able to scan it from the outside and you’re able to get really awesome high resolution images of it because you’re using electrons,” he said, adding that the technology is analogous to using a high f-stop on a camera.

The samples the class viewed went through an intensive process before they wound up in the microscope. First, the Bugscope team had to find insects — Robinson said that often times, schools will do this step for the Bugscope team.

Next, the bugs get stowed away for a while until it approaches the scheduled viewing. Then, they get coated with a metal and are put into the microscope.

“As it turns out, insects are absolutely the coolest thing to look at, because insects have an exoskeleton. So you can just take an insect that you find dead and you can take it in and you can coat it with gold palladium,” Robinson said. “Whereas, if you try to look at a worm, it’s just going to shrivel up because it has a soft body.”

Dravland said that this tied into his class’s life cycle unit and the curriculum in general, which is heavy on earth and environmental sciences.

“They’re beginning to learn in second grade how insects interact with humans, how they help, how they hurt,” he said. “They’re going to be working on trying to develop and identify features of some more native insects … and identify things that they do in our local environment.”

Interactivity and engagement, Robinson said, are the key to getting students interested in science. He said that with Bugscope, there’s no test — no pressure, just learning.

“They’ll start saying ‘well what did you study in school so that you could do this?’ and they’ll start thinking about it. And that’s what we want. We want science to be very approachable,” he said. “We get to see the coolest research come through here, stuff that nobody knows about yet … we want the kids to see this and get excited about it.”

Austin can be reached at [email protected]