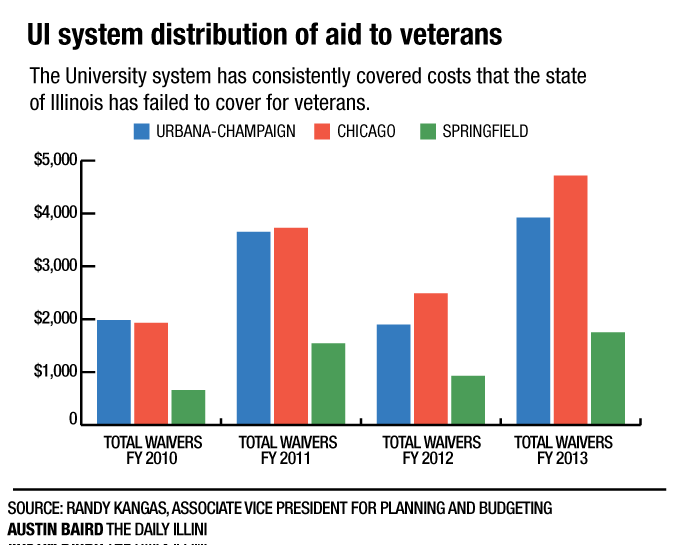 When Liz Ambros arrived on campus, she did not know that she was suffering from post-traumatic stress disorder.

Ambros came into Applied Health Sciences after serving in the Navy for six years, including an eight-month tour in Iraq. After she visited the Counseling Center on campus, Ambros, a senior, was diagnosed with PTSD.

“I didn’t realize I had it,” Ambros said. “I don’t think a lot of veterans realize that they have it either. You know, we always try to be tough. We always try to be strong. If there is anything wrong with us, we think, ‘There’s nothing wrong with us. We are normal. We are strong. We keep going.’ There are not only physical injuries. It is very common to have those invisible types of injuries — a lot more common than people think.”

In addition to the obstacles that veterans must overcome due to their military experience, transitioning to college poses a unique challenge for the men and women who have served and are serving in the armed forces. Many of the servicemen and servicewomen don’t have financial support from their parents, some are supporting families, and 25 to 30 percent return with physical disabilities, said Director of Veterans Programs Nicholas Osborne.

“Financially, anything we can do to help them finish their degree is the most important part of this,” Osborne said.

To aid these veterans, their tuition and fees are entirely covered by the federal government, the state government and the University. The Illinois Student Assistance Commission allotted $19.2 billion to create a veterans scholarship, said Randy Kangas, associate vice president of planning and budgeting. However, five or six years ago, as veterans began to return from tours in the Middle East, state funding started to run out, and the scholarship’s budget was cut to $36 million.

“Different universities are affected differently,” Kangas said. “For some of the community colleges, it is a very large number considering the size of the community college. The veterans are fine, the veterans are taken care of, and the University is happy to do that — so it has become in essence a waiver program instead of a scholarship program.”

The University is waiving tuition and fees for roughly 400 veterans right now, who are completing undergraduate, professional or graduate degrees. However, some of these veterans fees are covered by the G.I. Bill, and the Illinois Veteran Grant is used to cover graduate school or any additional cost of living that servicemen and servicewomen face when completing their education.

“Many of our students treat this (college education) like a job and want to get finished to get into the work force,” Osborne said. “Having the G.I. Bill has made it so they don’t have to work as much or stretch themselves too thin.”

The federal, state and University funding has already shown results, Osborne says. Due to programs such as counseling, student outreach groups, career advising and the waived tuition and fees, the University graduates around 76 to 78 percent of its veterans, as opposed to the national veteran graduation rate of 51 percent, Osborne said.

Veterans on campus have used the Illinois Veteran Grant in a variety of ways. Ambros hopes to spend the grant on medical school at University of Illinois at Chicago, fulfilling her dream of becoming a doctor, while students such as Brandon Ricca, junior in Engineering, and Johnny Watts, senior in Engineering, have used the veteran grants to pay for undergraduate tuition or other school-related fees.

Ricca, an active-duty member of the Navy, said the grants have allowed him and his wife, who is studying at Illinois State University, financial security while they achieve higher education.

“It’s just another thing you don’t have to worry about,” Ricca said. “To come out of school after three years with no college debt is a relief.”

After he graduates next spring, Ricca will serve for another five to six years in the military on top of the 6.5 he has already served.

Although some of the financial burden of getting a college degree has been relieved for Ricca, he felt that adapting to the environment at the University has been difficult.

“It is very hard to be a veteran because often, we have a lot of values and norms that often clash with a liberal college,” Ricca said.

Ricca and Ambros agreed that most students on campus don’t really recognize that some students are veterans and that there is a lack of understanding for the experiences that veterans have been through.

“We are doing this on our own,” Ambros said.

Through support from the Veteran Students Support Services at the University and the Illini Veterans student organization, the Chez Family Foundation Center for Wounded Veterans in Higher Education will be constructed on campus and is set to be completed by August 2015, Osborne said.

Watts, who is also the president of Illini Veterans, said this center will be critical for veteran visibility and support on campus.

“We know how hard (being a student is) when we are fully capable and with no injuries,” Watts said. “We are just looking to support them.”

Building the center on campus will also be an educational opportunity for the rest of the community, he said.

“When students meet a veteran in their classes, it is almost as if we are from another country or something,” Watts said. “It’s almost like they have no awareness of what we are. This will definitely help us and help them.”

Despite the challenges that she has faced, both in-duty and back home, Ambros said the sacrifices that she made for the country were worth it.

“If you asked anyone, I think they would do it all over,” Ambros said. “I would still go to Iraq. Knowing what I got out of it, I would still probably go back and do it all again.”