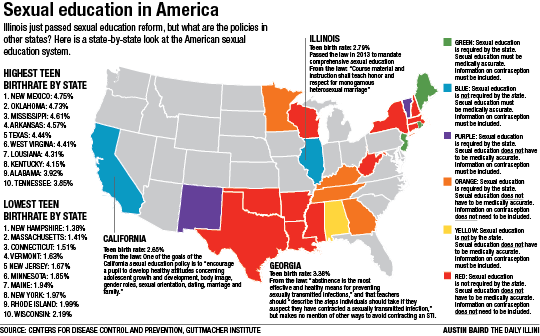 Editor's Note: In the May 5, 2014, edition of The Daily Illini, the graphic accompanying the article "Teen birth rate rises in Champaign County" incorrectly labeled green states. Sexual education isrequired by the states and the education must be medically accurate with information on contraception. The Daily Illini regrets this error.

Despite a national decrease, the teen birth rate is on the rise in Champaign County.

Jennifer Jackson, health educator with CUPHD, said it is difficult to pinpoint a specific cause for the spike in teen births, but she believes a lack of comprehensive sexual education could have played a role in Champaign District 4 schools.

CUPHD has been implementing “targeted interventions” to limit the teen birth rate, including a mobile clinic that operates outside of high schools in the district that provides STI testing and screening and educational materials on birth control, diet and exercise. CUPHD also offers a walk-in family planning clinic to help increase awareness about safe sex, birth control measures and STIs.

Though CUPHD has not been in contact with Champaign Unit 4 schools, Cheryl O’Leary, director of special programs for Unit 4 schools, said the unit has been working with Planned Parenthood to update its curriculum for the fall.

“The biggest change is that (sexual education has) moved from abstinence to preventative,” O’Leary said. “We’ve had to alter and work with local agencies here to make sure that we’re covering all of the preventative measures for students and the curriculum.”

Prior to 2014, Unit 4 schools were teaching both comprehensive and abstinence-only sexual education.

Some religious organizations have voiced opposition to comprehensive sexual education, pushing instead for abstinence-only programs or the removal of sexual education entirely from public schools.

One such organization is the American Life League — a Catholic, anti-abortion and anti-contraception organization. ALL takes a position opposite to Jackson’s, who has said that based on her eight-plus years as a health educator, parents view comprehensive sexual education favorably.

Jim Sedlak, vice president of ALL, is skeptical that the increase in teen births is a result of Champaign County lacking a comprehensive sexual education program.

“There’s a lot of components that go into it,” Sedlak said. “I would say that the people who are pushing comprehensive sexual education have no statistics to show that their programs actually reduce teen pregnancies.”

The American Life League works across the country teaching about the ineffectiveness and “dangers” of comprehensive sexual education.

“There’s a very real danger to the health of the young women who are taking (contraception) products that are being pushed through these comprehensive sex education programs, and they’re made to seem like a panaceum when in fact they have real problems,” said Sedlak. “Sex education, in our belief, does not belong in the schools at all.”

According to the CDC, more than 80 percent of sexually active teens between 15 and 17-years-old had no form of sexual education before they became sexually active, and “more than 90 percent of teens used some form of contraception the last time they had sex, but most of them relied on methods that are among the least effective,” including withdrawal, male condoms and the calendar method. Jackson said comprehensive education makes it more likely teens will practice safe sex.

Proponents of comprehensive sexual education argue that the national reduction of the teen birth rate can be attributed to a growing number of states mandating that sexual education taught in schools be comprehensive. They argue, because of this, more teens are using contraceptives and practicing safe sex, resulting in fewer pregnancies.

Those opposing comprehensive sexual education argue that more and more Planned Parenthood locations are closing as the birth rate decreases. In 2013, Planned Parenthood closed 48 locations and opened eight. They argue that with limited access to contraception and abortion, fewer teens are willing to risk sexual intercourse and are abstaining until marriage.

The opt-out option in Illinois law is not the only controversial material. Illinois sexual education policy also states that “state law also mandates that schools teach ‘honor and respect for monogamous, heterosexual marriage,’” which could potentially lead gay and lesbian students to feel ostracized from the rest of their classmates.

The flaws in Illinois sexual education policy are hardly unique. Of the 22 states that require sexual education curriculum in schools, only seven mandate that the information presented be medically accurate.

Illinois’ wording is not unique when it comes to LGBT students. Sexual education in Utah, for example, prohibits “the advocacy of homosexuality.” In Alabama, sexual education policy states, “An emphasis, in a factual manner and from a public health perspective, that homosexuality is not a lifestyle acceptable to the general public and that homosexual conduct is a criminal offense under the laws of the state.”

Across the country, sexual education policies are drastically different from state-to-state ranging from completely comprehensive to not having any requirements for any aspect of sexual education at all.