Alma Mater back for Commencement 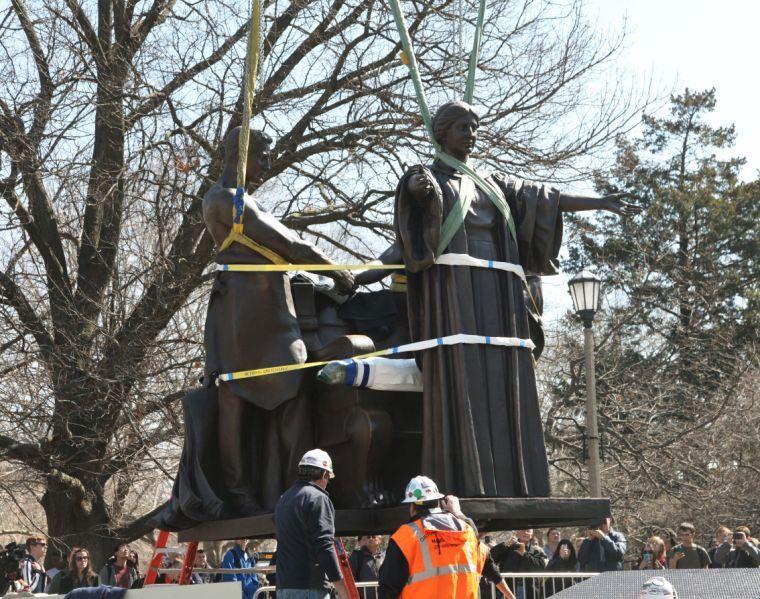 Workers struggle for almost an hour before finally placing the Alma Mater back onto her stand on the corner of Wright and Green on Wednesday, April 9th, right before noon.

It’s been a big year for Alma Mater. After much renovation, she returned to campus on April 9, with plenty of time for the 2014 Commencement ceremony. Students have been taking advantage of the statue’s return by visiting, taking pictures and climbing on the much-missed structure.

The final cost of the conservation project was $359,212 and was paid for by alumni and the Chancellor’s Fund, a pool of money from private donors. The conservation was led by Andrzej Dajnowski, director of the Conservation of Sculpture and Objects Studio, based in Forest Park, Illinois, which completed the conservation efforts on the Alma Mater.

The statue is now a chocolate bronze, as close to the original color as can be determined. The Preservation Working Group decided to return Alma to the color they believe sculptor Lorado Taft intended.

The restoration efforts took longer than originally anticipated, in large part due to that fact that every bolt had to be replaced. This was the most expensive and time-consuming part of the conservation efforts, said Jennifer Hain Teper, chair of the Preservation Working Group, in April.

Melvyn Skvarla, campus historical preservation officer, said in April that the sculpture was taken apart so the bolts could be changed in all the little areas of the sculpture. For some of the replacements, a conservator had to go inside the sculpture to reach the small spaces, he said.

Iron bolts are cheaper than bronze, so that may be why they were originally used. However, the combination of iron-on-bronze does not mix well and led to corrosion, which jeopardized the quality of the sculpture, said Christa Deacy-Quinn, collections manager at the Spurlock Museum and member of the Preservation Working Group, in April. But the new bronze-on-bronze combinations should last a few hundred years.

Alma Mater will be washed every two to three years, and a hot wax will be applied to protect the surface and prevent the sculpture from oxidizing to a harmful level, Hain Teper said.

While the statue was gone, University officials decided to seize the opportunity to gather memorabilia from around campus and make a time capsule to place in Alma Mater’s base.

It was “a unique opportunity to include something that shows where we are as a University,” said Joel Steinfeldt, University academic brand manager, in March. “It is a way of showing student life (and) faculty life what the University was like (to) the happy children of the future.”

Campus members were encouraged to submit thoughts and information about life at the University online. These were then compiled in a database and burned onto archival quality gold DVDs that are built to last for a few hundred years. He said the information can be read by a regular DVD player and any other technology that can read DVDs, acknowledging that future generations may not use this technology.

Departments across campus have submitted almost 100 small items to be placed in the capsule. Though the time capsule is physically small, Steinfeldt said they are trying to include as many people and campus units as possible.

Some of the items included in the time capsule are: a pick from the ELLNORA Guitar Festival, a brain LED light from Materials Science and Engineering professor John Rogers, a Commencement program and pin, a copy of The Daily Illini and a brick from Garner Hall.