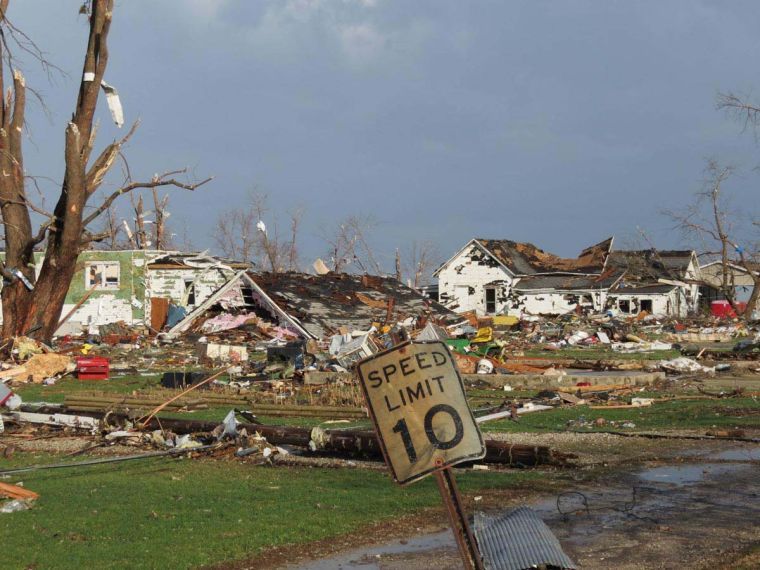 Houses were heavily damaged after a tornado ravaged through Gifford, Ill., on Sunday. According to the National Weather Service, multiple tornadoes touched ground in Champaign County shortly before 1 p.m. Around 12:30 p.m., a tornado warning was issued for Champaign County until 1 p.m. and was later extended to 1:15 p.m. At press time, The Chicago Tribune reported that at least three people were killed across the state due to Sunday’s tornadoes and storms. Pekin and Washington, two communities near Peoria, were among the hardest hit.

A massive tornado swept through the Central Illinois area on Nov. 17, causing damage in many nearby towns.

Since then, groups from the University, including the Red Cross and Habitat for Humanity, joined in to help the people in need both in Gifford and Washington, Ill. One University course pitched in by helping design new sustainable homes for the Gifford community.

The morning weather in Washington, Ill., was fine, except Zach Schildt thought it looked like it was going to rain.

For any of Washington’s residents who lived in one of the 1,000 homes destroyed or damaged in their town, it was hard to imagine what the holiday season would bring because they no longer had a place to hang their stockings. However, the season is famous for its miracles, and the stories from Washington are no exception.

Nancy McMullen, another Washington resident, learned about the tornado warning when she was shopping at the local Dollar General. At first, she stayed put, planning to wait out the storm.

In another part of town, Schildt was working at Todd’s Service Center, the local auto service business, which has a police scanner. He heard the radio buzz about a tornado touching down in a field somewhere in Washington. He grabbed his phone and texted his friends to tell them about the approaching funnel.

As McMullen idly waited, she changed her mind. Desensitized by previous false alarms, she didn’t expect that outside, conditions were perfect for a tornado to form at any moment.

She wanted to make it home before the hail started.

Considering the looming heavy rain, she avoided the crowded main roads and instead chose to drive through the subdivision behind the store.

As she traveled home, she saw the clouds forming into a tornado. She watched it touch down, growing larger and larger until it was a massive funnel.

“All I could see in my mirror was that tornado,” McMullen said.

About a minute after the police report, Schildt looked outside to see a “giant, huge, swirling, crazy looking — I can’t even describe it” storm cloud approaching. He said it sounded like a lawnmower-chainsaw-huge-train approaching in the distance.

That’s when Schildt decided he had to leave. There was no place for him to take cover at the garage.

He figured that because he would be dead anyway if the tornado was coming at him, he would try and find someplace safer to hide.

Anxiety raced through McMullen’s veins as she raced the tornado home. She noticed the funnel was heading in her direction, so she double-checked the intersection ahead of her and ran the red light.

Schildt ran out into the street in panic and tried to get one of the passing cars to give him a lift.

In the distance, he saw the flashing lights of a police vehicle, so he ran to it, and the officer unlocked the doors and let him in.

McMullen made it into her driveway and, still thinking the tornado was heading toward her, rushed to the front door, and her husband let her inside.

The subdivision that Nancy had driven through mere minutes before was destroyed.

“My husband and I decided I missed (the tornado) by a minute and a half,” she said. “Everything around where I was driving in the neighborhood is just total mass destruction. There are no homes — it was in the direct path of the tornado.”

Schildt’s home, the only one he’s ever lived in, is in a similarly destroyed neighborhood — with his father inside at the time of the storm.

The policeman dropped Schildt off at Hardee’s, where he then immediately tried to contact his family. His calls would not go through, and he spent the next 10 minutes deciding what to do.

As soon as he remembered his mother was right across the street at the church, he ran to make sure she was okay.

Schildt’s panicking mother explained that she had been talking to his father just before the phone went dead. His last words were, “It’s coming toward the house.”

In an attempt to see if his dad was OK, Schildt and his mother drove toward their neighborhood in a friend’s car but had to turn back because downed power lines made it too dangerous to drive through the residential area.

Back at the church, they waited for some word from him. His dad showed up 40 minutes later in their neighbor’s car.

He informed them that everything was gone, but Schildt didn’t realize what that meant.

“I thought, ‘Oh well, our house is gone, we can rebuild it,’ but our entire subdivision — everything was just gone,” he said.

Later, when he went to his home to see if anything could be salvaged, the true state of things was inconceivable.

“It looked like a war zone,” he said. “I’ve lived there all my life, and I just couldn’t believe my eyes seeing all of the destruction.”

Not much could be saved from his family home other than a few items of clothing, some of his homework, two calculators and textbooks from his last semester classes at Illinois Central College. He did save a pair of shoes, filled with insulation and debris, but he still has to clean them out.

Schildt was overjoyed when he realized two rather furry possessions weathered the storm as well.

One under the couch in the basement and one in a closet upstairs, his cats Rusty and Sugar survived the storm.

The tornado hit close to home for many who live on the University’s campus.

Jessica Weston wanted to go home and help as soon as she heard the news but traffic into the town was regulated, and not many people were being allowed in. Unfazed, she then decided to do something for Washington from Champaign.

She, with the help of three other coordinators and the entire Illini community, would fill a truck.

Seniors Weston, LAS; Mandy McGuire, ACES; Dani Frye, AHS; and Allison Canty, LAS, are all from Washington and created the “Fill the Truck” campaign to provide relief to their friends and neighbors whose lives were changed by the tornado.

They would gather the most necessary and immediate supplies for the victims of the tornado, and they would take them home on Friday when they left for Thanksgiving break.

Weston called Washington Mayor Gary Manier as the trailer that took two hours to load rolled into town. He directed them to the Sunnyland Plaza donation drop-off, and in a matter of 20 minutes, the ready and willing volunteers emptied the trailer.

In addition to the truck, more than $2,000 were donated to the Washington Secret Santa, a group focused on providing children with presents and restoring some normalcy to their holiday season.

Volunteers made sure people made homeless by the tornado had somewhere to gather for Thanksgiving. Schools and churches were turned into make-shift cafeterias for those who had nowhere else to go, like Schildt and his family.

Schildt spent his Thanksgiving eating at a local school while his parents ate at a local church. He just kept thinking if they had a home they would be together. It was awful for him to be separated from his family and to have been reduced to eating at a church and a school, rather than sitting at his dining room table eating a nice Thanksgiving meal of turkey. They should be talking to each other, having a nice family conversation.

Above all, he just kept thinking that they should be together.

Some people did not have homeowners’ insurance, and Schildt said he feels much worse for them than for himself because they literally lost everything.

Help came from the government four months after the disaster, when Governor Pat Quinn created a $45 million state relief package for affected areas, including Champaign and Washington counties.

“Our tornado-ravaged communities need help and they need it now,” Governor Quinn said in a March press release. “While it’s disappointing that our request for federal disaster relief was denied due to outdated rules, the state of Illinois is committed to providing assistance to communities that need it. Recovery won’t happen overnight, but this aid will help people rebuild their lives.”