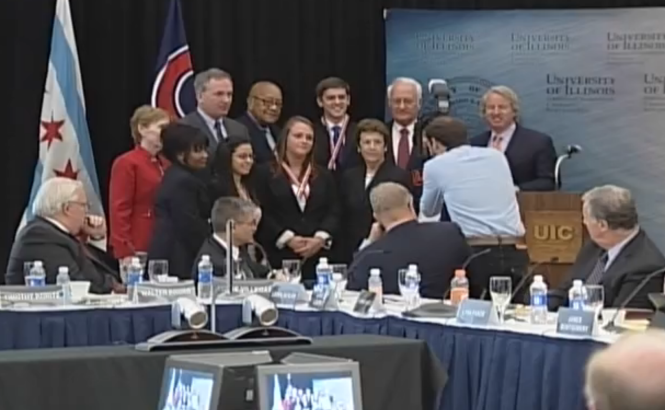 The University of Illinois Board of Trustees passed all items on its agenda at its Thursday meeting, approving the deanship appointments of Barbara Wilson to the College of LAS, Allen Renear to the Graduate School of Library and Information Science in addition to Fritz Drasgow to the School of Labor and Employment Relations.

The board also approved the appointment of Sarah Lubienski to interim dean of the Graduate College.

The Board of Trustees approved an extension of College of ACES Dean Robert Hauser’s term. Hauser was originally appointed in September 2010, but his term will now run until Aug. 15, 2016.

Students Erin Ahern, Brianna Alston and Brent Nelson alongside anthropology assistant professor Kathryn Clancy, School of LER professor Michael LeRoy and alumna Ann Perry will serve on the Urbana campus’ Athletic Board, effective August 2014 until their term expires or a successor is appointed. The Athletic Board is a committee under the Urbana-Champaign Senate with oversight of intercollegiate athletics on the Urbana campus. The board serves as an advisory committee to the chancellor and athletic director on financial management, personnel and other operational aspects of the intercollegiate athletics program.

Avijit Ghosh, senior advisor to President Robert Easter and professor in Business, will serve as chief executive officer of the University of Illinois Hospital and Health Sciences System. Additionally, Ghosh will serve as associate vice president for hospital operations in the Office of the Vice President for Health Affairs.

The board approved the transfer of the Italian program from the department of Spanish, Italian and Portuguese to the newly renamed department of French and Italian, finding that more cultural and linguistic connections exist between French and Italian than Italian, Spanish and Portuguese. Other institutions organize their Italian programs in a similar fashion as well. All affected departments will be renamed.

During public comment, several undocumented University of Illinois at Chicago students spoke regarding their difficulty in receiving financial aid and scholarships for higher education. These students called on the board to make education more accessible for this growing population of students.

Tyler can be reached at [email protected] or @TylerAllynDavis.