Sororities can provide ‘a home away from home’ 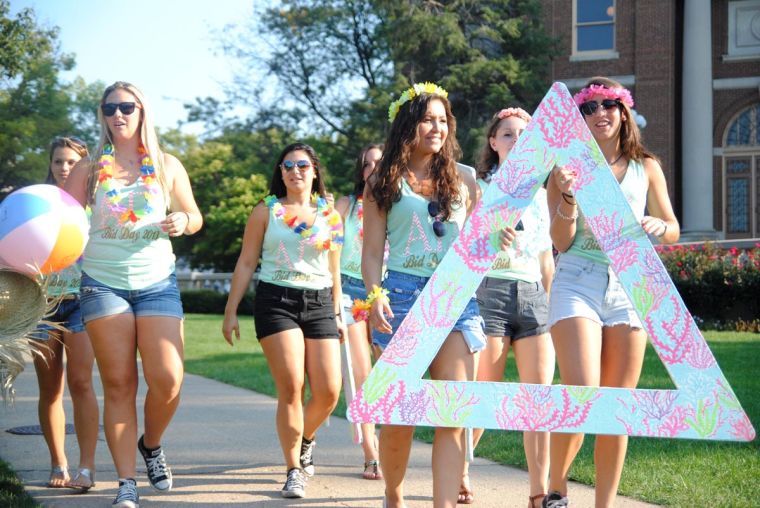 Coming to college means starting a new chapter in your life. You will be introduced to more new things, people and experiences than you ever imagined. For many women, this includes going Greek.

Last year, over 990 women pledged a sorority through formal recruitment.

This fall, over a thousand women will go through formal recruitment at Illinois to find what many call “a home away from home.”

The decision to participate in formal sorority recruitment can be daunting. Between negative stigma posed in movies, TV shows and the media, the cost of being a part of the organization and the recruitment process itself, many women are turned off to the idea before really giving it a shot.

Caroline Eichelberger, a sophomore in LAS, was hesitant of the process, but decided to rush regardless.

“To be honest though, the recruitment process wasn’t exactly my idea of fun,” she said. “It was hot, it was long, and it was exhausting. Girls everywhere were crying and complaining and calling their moms. There were houses that I immediately knew were not for me, but there were also times when a house I liked didn’t invite me back, despite what I thought was a great conversation. And that was hard. It made me wonder what they didn’t like about me and what qualities I was missing. But then there were houses that did invite me back, where the girl I had spoken with remembered me, and seemed genuinely happy that I was there again.”

This year, the recruitment process at Illinois is spread out over two weekends in September. With each progressing round, potential new members learn more about the chapter.

“Those moments were what kept me going through the long days,” Eichelberger said. “During third invite, I listened to seniors speak about the adventures they had gone on together and realized that the sisterhood in these houses was actually real.”

The last day of formal recruitment is Bid Day, where women receive invitations to join their new chapter. From there, the welcome home party begins, where they spend their evening taking pictures, meeting their new sisters and celebrating the new house they can call home.

“On bid day, girls who had cried after first round now cried tears of joy as they were welcomed home by their new sisters,” said Eichelberger. “I cannot describe the feeling I got when I opened my envelope to see my bid card.”

Although the formal recruitment process can be daunting, many times, it’s the fear of what comes after the bid cards are distributed that worries potential new members. Tales of insane partying, hazing and other scandalous activity are commonly associated with college Greek life. Formal recruitment also gives women the opportunity to find out how they can become involved through leadership, service and networking.

Yianna Sotiropoulos, a junior in Business, is currently the president of Alpha Chi Omega. Sotiropoulos credits AXO with giving her the opportunity to grow as a leader, make life long connections as well as find her best friends.

“I wanted to run for a leadership position to not only give back to this great organization, but to help continue to improve Alpha Chi Omega,” she said. “Through my position, I am able to collaborate with my executive board, Alpha Chi Omega headquarters, and my sisters in order to ensure the chapter is reaching our fullest potential. The biggest thing I have learned from being president is that, no matter what you do in life there are always people there to support you, help you, and guide you.”

With over 400 registered student organizations at the University, there are many ways to get involved with campus. Josie Kossman, a junior in Media, explained that sororities have an edge on other groups.

“The opportunities with a sorority go beyond college,” Kossman said. “These are national organizations with thousands of members across the nation. By joining, members are given an extensive network of people who they have an instant bond with. Being able to say you’re a member of ‘x’ sorority and meeting someone in the work force who also is a member of that house gives you a bond and an instant advantage with that person.”

Attending a school with an undergraduate population of more than 32,280 can be a daunting task for anyone, but especially someone who was born and raised in a small town. Kortney Carr, a sophomore in Media, comes from a small town with a population of about 3,000. Carr decided to go through recruitment to overcome the possibility of becoming lost in the crowd.

“Getting involved in Greek life really made the campus feel smaller,” Carr said. “You meet so many people through things such as social or philanthropy events that you constantly see familiar faces.”

Kayla is a senior in Media. She can be reached at [email protected]