Campustown construction results in loss of customers for local businesses 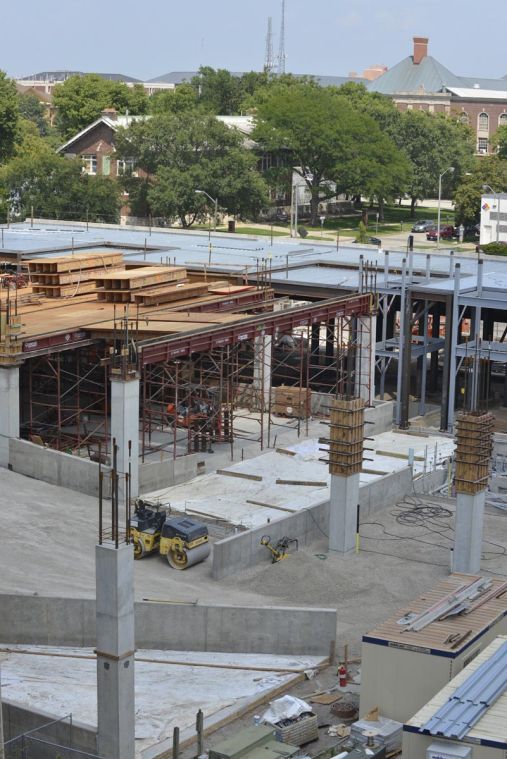 JSM Apartments is in the middle of constructing the Campus Center at Sixth and Healey streets. Apartments will be ready to lease in August 2015.

Construction has covered a majority of Campustown this summer, resulting in a loss of customers and summer service for local businesses.

Fat Sandwich Company, located on campus at 502 E. John St., Champaign, is one of the businesses feeling the effects of the ongoing summer construction.

Michael Campbell, manager of Fat Sandwich Company, said construction has scared people away from coming to the restaurant this summer.

“The construction has slowed things down quite a bit,” Campbell said in an email. “We’ve seen about half the business this summer and that is with longer hours. The roads being closed and people having to drive in circles has really scared the townies away this summer.”

Although regular customers have been hesitant to eat at the restaurant, Campbell said construction workers give Fat Sandwich a bit of business each week.

“I love the guys that come in from the construction companies but it costs a lot to eat out every day, so we only see the groups of them once a week,” Campbell said. “The amount of workers does not make up for the lack of people from around the area.”

Construction has been spread out across campus for weeks, causing several street and sidewalk closures. Road construction could be seen at the intersection of Gregory Drive and Sixth Street from mid-May to mid-July, which then moved north to Armory Avenue and Sixth Street.

According to Erin Lippitz, executive director of the Champaign Center Partnership, local apartment companies have also contributed to the ongoing construction around campus.

JSM Apartments is continuing construction at the intersection of Sixth and Healey streets. The company is building a new set of apartments, called Campus Center, that will have apartments for lease in August 2015.

Lippitz also said that Bankier Apartments is responsible for ongoing construction located at Sixth and Green streets, with a new set of apartments being built there as well.

Apartment construction happening at Fourth and Green streets has also blocked off a portion of Fourth Street, creating some inconvenience for those heading south into campus.