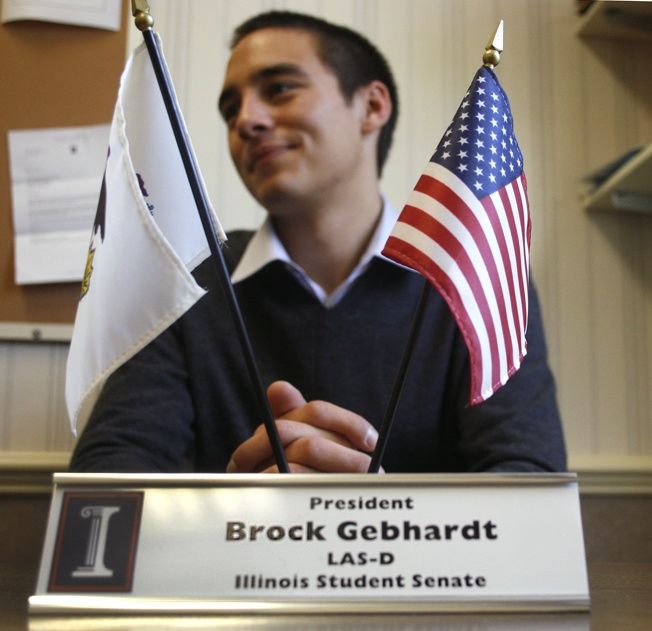 Brock Gebhardt sits in the Illinois Student Senate office during his tenure as student body president.

Former President of the Illinois Student Senate Brock Gebhardt worked to save lives during his time at the University. On Aug. 7, he passed away due to injuries sustained in a car accident.

The news shocked those who knew Gebhardt, as they said the 23-year-old was someone full of life.

“It really hit close to home,” said Matt Hill, ISS Vice President-External. “I think I forgot … the impact and legacy he left at our University and in my fraternity were a lot bigger. I didn’t really realize that until he was gone.”

Hill is a member of the Phi Sigma Kappa fraternity, which Gebhardt helped recolonize in 2011. Hill also served as an intern for ISS Chief of Staff Jenny Baldwin during Gebhardt’s tenure as president. He said although he never had a strong friendship with Gebhardt, he admired him and aspired to be like him.

“Brock was a person who, no matter how you knew him, he could sort of win you over by just looking at him, shaking his hand and talking to him for a brief five seconds,” Hill said. “He had such politician qualities. He really impressed people and pulled people in.”

One person Gebhardt “pulled in” was State Rep. Naomi Jakobsson, D-103. Gebhardt approached her with the idea of making a University policy a statewide policy: granting immunity to those who call on behalf of someone with alcohol poisoning.

“He came in and not only did he start talking about the idea, but Brock had already done lot of research on it,” Jakobsson said. “He brought copies of legislation from other states and of course some stories of why this is important, and I just thought he was so impressive and so thorough.”

Gebhardt and Jakobsson worked together to create and lobby for the Alcohol Poisoning Immunity Bill, HB2341.

“Not only the reasoning for the bill, but the fact that he was able to establish a relationship with Naomi and other representatives definitely, in my eyes and a lot of other people in the senate, is one of his greatest accomplishments,” Hill said.

Scott Grubczak, ISS treasurer, served as one of Gebhardt’s five interns during his tenure as president. He said Gebhardt worked tirelessly throughout the year to work on the Alcohol Immunity Bill.

“This bill is going to save lives, that’s for sure,” Grubczak said. “It’s sad what happened, but it’s nice to know that he’s going to be saving lives even though he won’t be here.”

The bill currently sits in the rules commission because it did not pass before the end of last session, which ended in May.

Jakobsson said she will continue lobbying for the bill.

Gebhardt’s political experience did not end with ISS. After graduating from the University in 2013, he began working as a legislative analyst for partisan staff in the Illinois General Assembly.

“I feel like something was just stolen,” Hill said. “Not from me, but the world. I can’t help but think what he could’ve done for Illinois, for our country. I know it sounds crazy, but he had such big dreams and encouraged everyone else to have big dreams.”

Not only did Gebhardt encourage others to have big dreams, he also inspired those he worked with through his work ethic.

“He loved the senate, he loved the student body, and he was always there to help people,” Grubczak said. “He showed me that if you’re going to do something, be passionate about it because it will make it more enjoyable for you and the people around you.”