Board of Trustees reject Salaita appointment 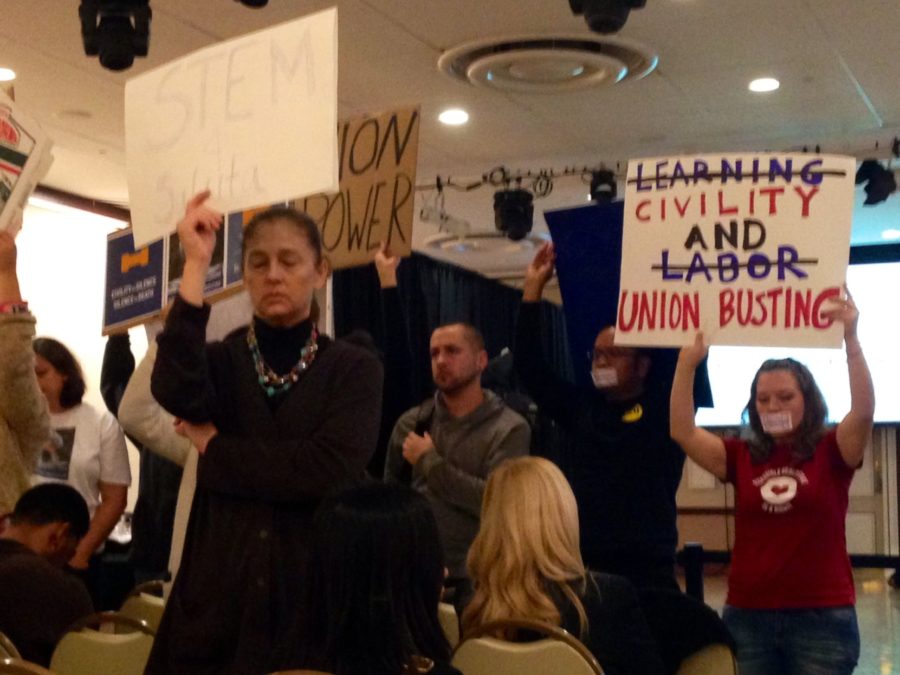 Lauren Rohr | The Daily Illini Supporters of Steven Salaita gathered at the Board of Trustees meeting in the Illini Union on Thursday. The board voted against appointing Salaita to the University faculty, and members of the crowd turned their backs in protest.

The Board of Trustees voted 8-1 to reject Steven Salaita’s appointment to the American Indian Studies program on the Urbana campus at its meeting on Thursday.

“I’ve come to the conclusion that Professor Salaita’s approach indicates that he indeed [is] incapable of fostering a classroom environment where conflicting opinions [are] given equal consideration regardless of the issue being discussed,” said University President Robert Easter.

The vote marks the end of the administration’s role in the controversy surrounding Salaita’s appointment to serve as a professor. The decision to rescind Salaita’s position at the University was made by Chancellor Phyllis Wise after she learned of several controversial tweets Salaita had sent regarding conflict in Gaza. Wise also received an outpour of emails from donors, alumni and students regarding his appointment before she sent an email to Salaita, notifying him he would not become a professor on campus.

“As chancellor, I recognize the possibility of making difficult and unpopular decisions,” Wise said before stating that she would not recommend an affirmative vote on Salaita’s appointment to AIS.

The University could face a lawsuit in the coming months, as Salaita’s attorney, Anand Swaminathan, said he would pursue legal action if Salaita was not hired.

“I don’t think it was a difficult decision,” said chairman Christopher Kennedy when asked about the board’s decision making process. “We simply backed the President and the Chancellor; a President and Chancellor that we have great faith in. The current board has really acted to restrain itself from overreaching into the day-to-day operations of the administration.”

Before trustees voted on Salaita’s appointment, they heard public comments from attendees such as American Indian Studies director Robert Warrior, who said that if hired, Salaita would be “fair and open” to his students. Warrior dismissed the speculation that Salaita would be hostile towards students with political beliefs opposite of his own.

A vast majority of the public who attended the meeting, held in the Illini Union, were supporters of Salaita. Supporters held up signs with slogans such as: “Reinstate Salaita,” “Civility=Silence, Silence=Death” and “#UIstudents4salaita.

“Nothing is nearly so obvious as Salaita’s detractors would have us believe,” Warrior said. “In our review of Salaita’s teaching, American Indian Studies found no evidence of anything but strong teaching, motivated by what seems like a sincere interest in allowing every student the chance to broaden their skills in critical thinking.”

Following the conclusion of Warrior’s statements, Josh Cooper, senior in LAS, voiced his support of Wise’s decision to advise the board not to approve Salaita’s appointment. In his address to the trustees, Cooper said he was speaking on behalf of more than 1,000 current students who, in the last 48 hours, had signed a petition supporting Wise.

“Chancellor Wise, we admire your courage, your wisdom and your ongoing efforts to ensure civility on our campus,” said Cooper, quoting the petition. “Hate speech is never acceptable for those applying for a tenured position incitement of violence is never acceptable, [and] yes, there must be a relationship between free speech and civility.”

Trustee James Montgomery, cast the sole affirmative vote. While he said he initially supported the withdrawal of Salaita’s position, he believed that he had been mistaken in doing so.

“What makes this a great and unique country is that I can stand on a rooftop and call somebody an SOB,” said Montgomery. “Subsequent information that I did not have when this letter was signed, has really caused me some great concern, and that information has to do with evidence of people, in effect, boycotting this University in carrying out some of its most important functions as a university.”

To date, 16 academic departments or professional organizations have either issued votes of no confidence in Wise or statements intending a boycott of lectures scheduled on campus. A petition on Change.org demanding Salaita’s reinstatement has collected more than 18,000 signatures.

Outraged at the result of the Board’s vote, supporters of Salaita marched out of the conference hall, chanting, “shame on you!”