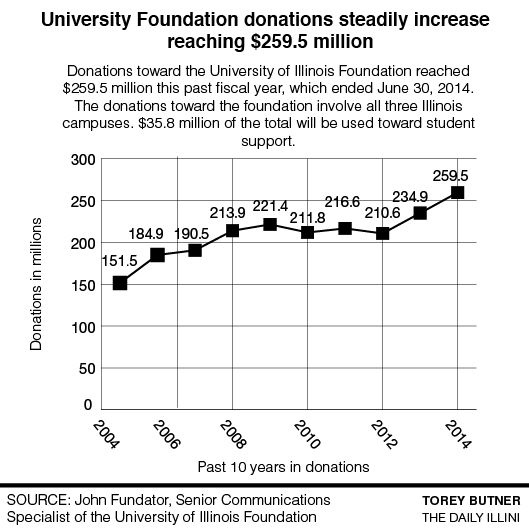 This fiscal year, the Foundation received a 10.5 percent increase in donations while the Urbana-Champaign campus received about a 5 percent increase, said Dan Peterson, senior vice president for the UIF and vice chancellor for Institution Advancement.

The Foundation comprises the University of Illinois’ three campuses which received $259.5 million in donations this year. The University received $180.9 million of the total donations.

According to Peterson, “about 30 million dollars of it is directly attributable to student scholarships, fellowships or related programs … 60 million for direct faculty support, 30 million for student support, 20 million for facilities, which the majority of that was for the State Farm Center which will benefit students … 40 million was unrestricted money at the unit level,” Peterson said. He added that most of the money that donors don’t specify toward a college or a program will either go toward students or faculty.

Over the past 10 years, the Foundation has received over $2 billion in donations.

Over the last fiscal year, a total of 75,000 donors gave 151,000 gifts or individual transactions to the University.

According to Peterson, the top four recipients of the donations were respectfully: the College of Engineering, athletics, the College of Agriculture, Consumer, and Environmental Sciences and the College Liberal Arts and Sciences.

According to John Fundator, senior communications specialist at the Foundation, the money donated to the Foundation for all three campuses was divided into cash gift (38.7 percent) pledge payments (27 percent), grant payments (21.2 percent), estate distributions (9.3 percent) and annuities/life income (3.8 percent).

“Donors have the option of designating their contributions to specific units (colleges, schools, departments, museums, etc.) for specific purposes, or they may designate their gifts as unrestricted,” said Fundator. “Unrestricted support provides University administrators the flexibility to fund priorities.”

Of the $259.5 million donated to the Foundation, Fundator said that $35.8 million will be used for student support.

Peterson said that donations to the University are distributed according to the donor’s wishes, and the donations are divided into three segments: principal, $5 million or more; major, $25,000 to $5 million; and annual, $0 to $25,000.

Donations were made in all three segments to the University, however annual donations are rising.

Peterson said the University had a strong year in principal gifts, such as significant pledge payments from The Grainger Foundation and the Bill and Melinda Gates Foundation.

“They (private donors) have a passion for what we do and believe in what we’re trying to do to help shape the world,” Cline said.

Student scholarships are the number one fundraising priority for the College of ACES, according to Cline. In the past several years, on an annual basis, an average of over two and a half million dollars in scholarships has been given to undergraduate students in ACES from private donors.

Peterson said the University hopes to continue reaching new goals with fundraising in the coming years and is grateful to its donors.

Ali can be reached at [email protected]