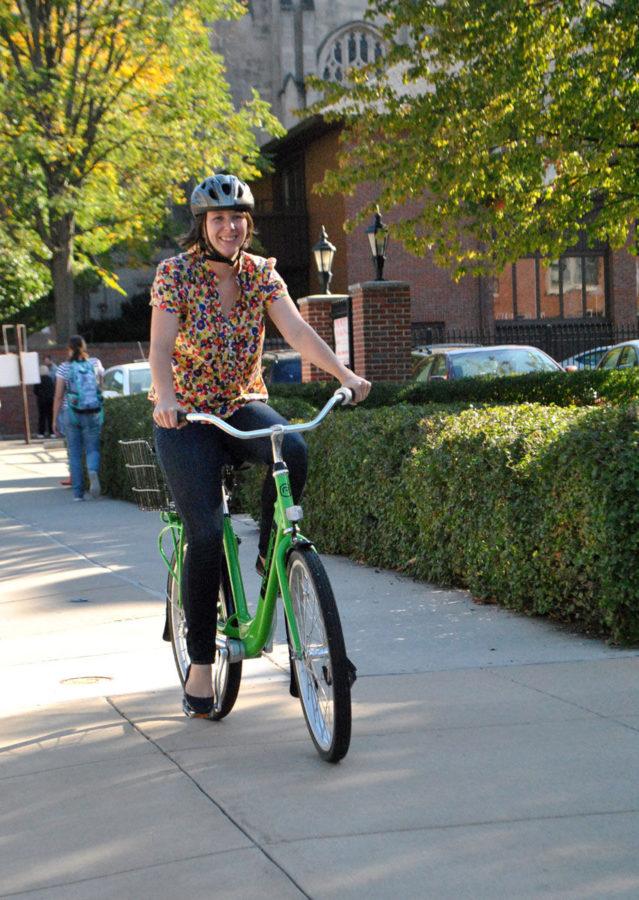 YMCA associate director, Kasey Umland, rides down the sidewalk on one of Y-Cycle's rental bikes.

In the occasion of a flat tire or a sudden urge for adventure, students and community members can rent bikes through the YMCA’s bike-sharing program, Y-Cycles.

“We want to give people biking an option for transportation and to explore it without making a huge purchase for a bicycle,” said Kasey Umland, program director at the YMCA and 2007 University alumna. “It’s also a great way, if you rely on your bike, to have a back-up system.”

As a bicyclist and someone without a driver’s license, Umland hopes Y-Cycles will give students and community members the opportunity to experience the health, economical and environmental benefits she’s received, Umland said.

She first introduced the idea of a bike-sharing program during a staff meeting about limited resources for community bicyclists in the fall of 2011.

Thereafter, Y-Cycles gained momentum during the 2011 to 2012 academic year, when students enrolled in a Learning in Community class developed a project proposal for the YMCA. The next year, the YMCA raised enough money through a $2,000 grant from the Community Foundation of East Central, Student Organization Resource Fee funds and online crowdfunding via Indiegogo to launch the program and to purchase four rental bikes.

After figuring out the kinks in the program during its soft opening last summer, the YMCA hopes to expand its usership and become an avenue for people to eventually become full-fledged bicyclists, Umland said.

“We’re not trying to make money off of it, although it would be a lovely, unintended consequence,” Umland said. “The best case scenario is that everyone who rents a Y-Cycle thinks, ‘Bikes are great!’ And buys one for themselves and never has to use Y-Cycle again.”

But Umland realizes that several roadblocks are in the way of achieving this result – the low level of awareness of the program and the cultural perception of biking as a recreational means of transportation, she added.

Students and community bicyclists agree with these said challenges.

“A lot of people are used to it being a toy, rather than a means of exercise and transportation,” said Justin Licke, senior in Engineering and former YMCA member. “It wasn’t until last summer that I was even okay with calling myself a cyclist; it seemed like a term you’d reserve for crushing miles on a road bike and hanging out in spandex.”

But despite the anticipated challenges, Grace Kyung, graduate student in FAA and YMCA board member, notes that the Champaign-Urbana community is becoming more accepting of bike-sharing programs.