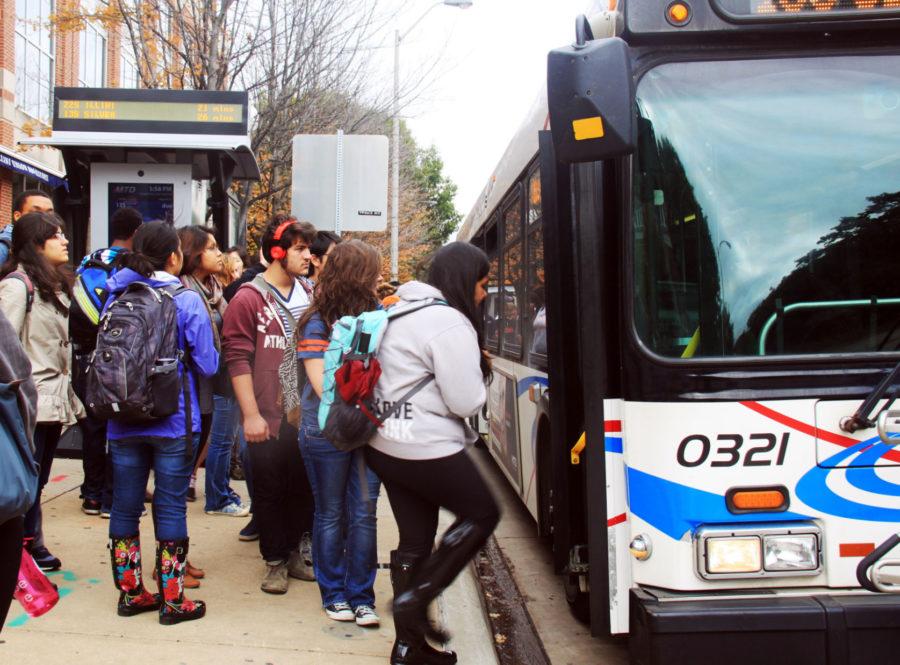 A CUMTD bus stops to pick up students at the Illini Union Bookstore on Oct. 14, a few months after receiving gold-level recognition for its Sustainability Commitment initiative.

CUMTD recently received gold-level recognition for its Sustainability Commitment initiative, but the transit district is still pushing to further its green efforts on the roads and in the office.

In 2009, CUMTD became a founding signatory of the American Public Transport Association’s Sustainability Commitment initiative. Signatories committed to a few core goals and were able to apply for higher recognition as they progressed. Five years later, in February 2014, CUMTD applied for gold-level recognition, the second-highest level possible. The Los Angeles County Metropolitan Transportation Authority is the only service to hold the highest level, Platinum Level status.

The company was awarded gold-level recognition in August 2014, becoming one of only 12 transportation companies with the standing.

“MTD works hard to be a positive member of the community and the University,” said Jane Sullivan, CUMTD grant manager and sustainability planner. “This is another way that we can be socially and environmentally responsible.”

This has huge benefits for the University community, as well as the city of Champaign, said Champaign Mayor Don Gerard. He added that Champaign has always had a great partnership with CUMTD and the city strives to work “hand-in-hand” with the company to maintain that relationship.  Gerard noted that the city works hard to maintain infrastructure, particularly roads and bridges, and in turn CUMTD “urbanizes” Champaign, making it a “21st century city.”

To maintain sustainability, CUMTD sets action items, stretch goals and reduction targets. This includes reducing the greenhouse gas impact of buses, as well as increasing the number of hybrid vehicles in the company’s fleet. Currently, 75 percent of CUMTD busses are hybrids.

“Public transportation is inherently beneficial for the environment because it avoids the use of single-occupancy vehicles,” Sullivan said. “MTD bus service can move more people with less energy, reducing fuel usage, greenhouse gas emissions and other pollution.”

As far as in their offices, the company will continue the “green training” that all employees receive upon hiring, which includes reviewing the company’s idling policy and CUMTD’s use of soybean biodiesel.

Additionally, the company recycles waste oil, which they use to heat their maintenance facility. They have also installed a geothermal heating and cooling system in their administration facility.

Since 2009, CUMTD has tracked water usage, air pollutant emissions, greenhouse gas emissions, energy use and its recycling and waste. The company continues to analyze the data each year in an effort to reduce its environmental effects and surpass the goals of its sustainability commitment, Sullivan said.

Additionally, the company encourages people to bike to bus stops, rather than drive, by offering bike racks on the front of every bus.

Although gold isn’t the highest ranking CUMTD could receive, the company strives to reach platinum level in the future, Sullivan said.

Abigale can be reached at [email protected].