College of FAA adapts to falling enrollment numbers and funding 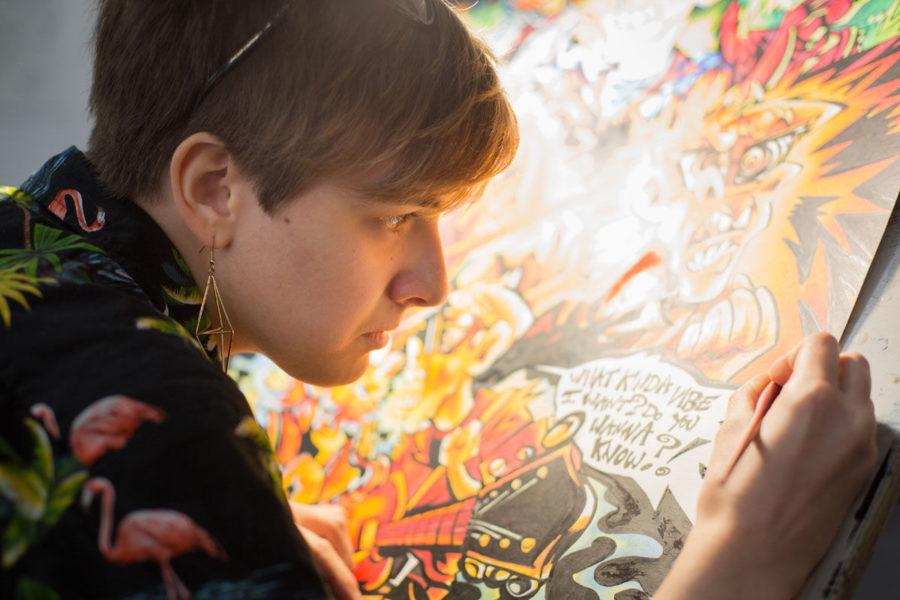 Alex Lutz, senior in FAA, paints during class at Flagg Hall on Thursday. Applications to the College of Fine and Applied Arts have been dropping since 2008.

Since declaring her major, Eliana Park has been pressured by her parents to chose a major with more financial security.

However, Park, senior in the College of Fine and Applied Arts, couldn’t see herself sitting behind a desk commuting numbers, as her original major in accounting would have likely required. Despite the concerns raised by her parents, Park is pursuing her career aspirations in violin performance.

“In the beginning, when I first changed my major [from accounting], they were kind of upset about it,” Park, said. “They wanted me to be in a field of study where I would have a for-sure job and have a stable future.”

While Park decided to pursue a major in the arts, she is an outlier to a larger trend showing falling enrollment numbers in the college.

Dean of FAA Edward Feser said that the economic long-term financial worries of potential students and their families might be playing a role in the declining enrollment numbers.

“The pressures are even a bit higher for the arts because students are naturally concerned that the degree they earn will produce a good standard of living,” Feser said.

While the pressure Park received from her parents has since subsided, she knows that a high-paying starting salary may be unlikely. But to Park, a career in the arts is worth more than just dollars and cents.

“(Careers in the arts) may end up paying less than accounting or a field of study like that,” Park said. “But I’d rather do something that I love and be paid less for it than be stuck in something that I don’t like.”

The college is also striving to adapt to rising tuition costs and reduced levels of state funding.

Feser said that as public universities become increasingly reliant on tuition-based funds, programs in the arts are disproportionately put in financial risk.

“Like a variety of other disciplines on the campus, most arts disciplines do not generate enough tuition revenue to cover their costs,” Feser said.

Feser said that many art programs have significantly lower student-to-faculty ratios than many other fields of study. For example, music and dance classes require a studio learning model, meaning that many classes will consist of small groups or one-on-one instruction. This lower ratio means a higher cost for the department.

As FAA has become increasingly dependent on the funds it receives from tuition, the price of tuition has been slowly rising.

“As we become more dependent on tuition for our revenues, we naturally have to be increasingly concerned about how the specific mix and relative number of majors and programs we support affects our financial situation,” Feser said. “Under these conditions, relatively higher net cost disciplines are feeling some pressure.”

“Earnings for arts graduates, especially within the first few years of graduation, are lower than for graduates from STEM fields, for example,” Feser said.

He said FAA is trying to alleviate some of these financial concerns by implementing new programs and majors for prospective students. These changes would hopefully help the department recruit and retain more students as it continues to evolve to adapt to a changing college landscape.

“Many emerging programs create opportunities for students to earn multiple degrees, such as in engineering and music, which students are finding increasingly attractive,” Feser said. “Many create more opportunities for non-arts majors to have an artistic learning experience, which can help develop creative thinking and design skills.”

Feser said he hopes the new programs will catch the interest of students who wish to pursue a degree in the arts but, like Park, are concerned about financial security.