Election 2014: Behind GOP success, what’s next for the parties 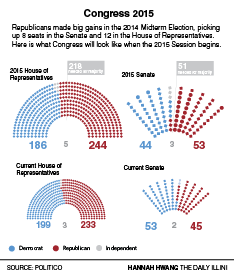 The results of the 2014 Midterm Election are in: big gains for Republicans and big losses for Democrats. Though the outcome of the election is clear, a definitive theory that explains the results has yet to emerge.

Brian Gaines, professor of political science at the Institute of Government and Public Affairs, said that while it is difficult to definitively say what factors led to the Republicans’ success in the election, there are some things that we can conclude from its results.

“To some extent, what happened is a sort of unlikely theory about one party having a permanent advantage was shot down,” Gaines said. “My big conclusion is neither party has a permanent advantage right now. We’re going to have a period of volatility where there’s a great year for the Democrats, a great year for the Republicans; we’re not moving toward dominance by one party or the other.”

Gaines pointed out that historically, a president’s party typically loses seats in Congress during midterm elections. This has happened every year since 1934, except for 1998 and 2002, he said.

Democratic candidates in the 1998 midterm election were able to pick up additional seats in Congress by riding a wave of public frustration over President Clinton’s impeachment. In 2002, President Bush’s approval rating was still in its post-9/11 bump, leading to gains in Congress for Republican candidates.

This election cycle, Gaines said, had an older, whiter electorate than in 2012, a voting demographic that favors Republican candidates. In fact, 65 percent of the 2014 electorate was aged 45 and up.

It was easier to motivate Republican voters to turn out on Election Day, he said, by tapping into their frustration with the president than it was for Democrats to drum up a supportive vote.

“Democrats are dependent on demographics that really don’t vote in midterms,” Balkan said. “Many people saw Democrats as those in charge still, whether Democrats wished to be portrayed that way or not.”

Balkan added that Democrats failed to communicate their accomplishments to voters, a sentiment shared by Evan Keller, communications director for Illini Democrats and sophomore in LAS.

Keller said that while the economy is growing and unemployment is lower than when Obama took office, many voters are still not feeling the effects of the recovery and as a result, chose not to vote for Democratic candidates.

While most Illinois Democrats ran fairly progressive campaigns, Keller said, Congressional races around the country saw Democratic candidates distancing themselves from the president.

“There weren’t too many candidates here in Illinois that ran away from Obama,” Keller said. “All these candidates that did that, claimed no allegiance to Obama and his policies, most of them lost big.”

The most talked about example of this was a Louisville Courier-Journal interview with Alison Lundergan Grimes, Democratic challenger to Republican Kentucky Senator Mitch McConnell, in which she refused to say whether she voted for Obama or not.

What’s next for Congress? For Democrats and Republicans?

Keller said that if Democrats hope to retake the Senate and maintain control of the White House, they must do a better job of fielding candidates that voters can connect with.

“We start recruiting candidates that have some history of activism or teaching or a trade because those are candidates that people can definitely more relate to than these candidate that they don’t know much about,” Keller said. “As long as we’re getting away from always recruiting judges or lawyers.”

Keller believes that on social issues, Democrats have a winning platform but need to be more aggressive in pursuing major issues like education reform and marijuana legalization.

“Socially, we’re there, but I think there are issues that we could be leading the pack more than we are,” Keller said. “The party should take a strong stance on marijuana legalization; generally there’s been a strong correlation between Democrats and legalization as opposed to Republicans, but you just haven’t seen that translate into actual party platform or much support from mainstream candidates.”

Balkan hopes to see big legislative action from the new Republican Congress over the next two years, particularly on civil liberty issues, infrastructure development and the Affordable Care Act.

“Whether or not they deserve to be, civil forfeiture has been a major issue recently thanks to John Oliver and different news agencies, eminent domain issues have come up with regards to Keystone Pipeline and privacy protections from the NSA have continued to be in the news,” said Balkan. “We are finally getting data from Obamacare; we should definitely use it to make the current system as effective as possible. The plan is here for the next two years, make it right.”

Gaines said that while it is likely the White House and Congress will butt heads over the next two years, bipartisan compromise is not outside the realm of possibility.

“I wouldn’t say that I’m positive we’ll see a lot of bipartisan compromise on big issues like tax reform or immigration, but it won’t astonish me if we do,” Gaines said. “A neutral carbon tax that doesn’t result in increased taxes, I could imagine that passing the Republican House.”