MillerCoors billboards with UI logo near campus taken down 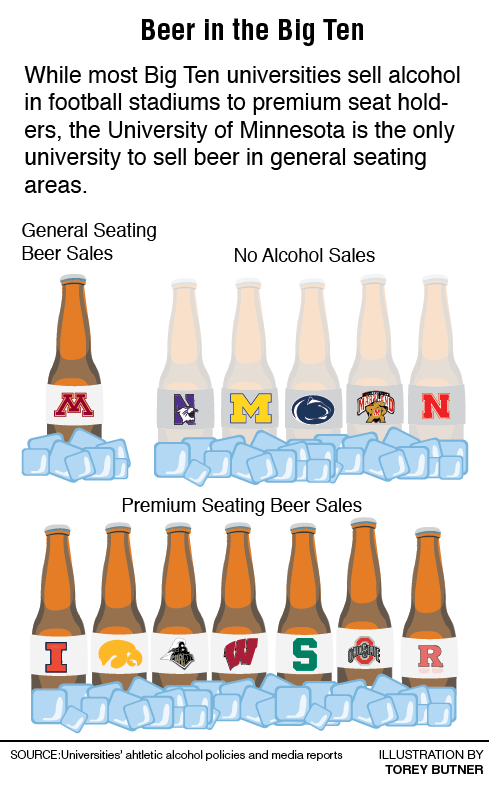 MillerCoors may be the official beer sponsor of the University, but do not expect to see any of their billboards around campus.

The University, through the efforts of its advertising partner Learfield Communications and its subsidiary Fighting Illini Sports Properties, entered into a sponsorship with MillerCoors on July 1. While the University has not had any alcohol sponsors in the past, Kaufmann said that 2014 was a good year to start.

“For the past decade or more, even though they didn’t have authorization to use our logos, you could walk into restaurants or bars and you could see posters, schedule signs, many things that were produced without authorization by several beer companies,” Kaufmann said. “We kind of looked it as, ‘if we’re going to open it up, if we’re going to allow beer sponsorships, now’s a good time to do it in conjunction with the rebranding.’”

Six other Big 10 universities, including Iowa and Wisconsin, have recently entered into alcohol sponsorship relationships, Kaufmann said, which also played a role in the University’s decision.

The artwork on the billboards, which included the Block I logo, was initially approved for display in smaller venues like restaurants and bars. When the Athletics Department discovered that it had been displayed on billboards near campus, they asked MillerCoors to take the advertisements down. The company promptly complied.

“They certainly didn’t think they were causing any harm,” Kaufmann said. “That artwork had already been approved, but it was just approved to be in other venues and not on billboards, and so we as a department had not officially authorized billboards, because it was never really presented to us or asked of us that way.”

Kaufmann believes there was a miscommunication between the three parties regarding what kind of advertisements the artwork could be used for, although he said the Athletics Department was unsure if Learfield knew that the billboards were not approved when they were in negotiations with MillerCoors.

He said the campus billboards were taken down due to concerns that they could imply the promotion of underage drinking. Billboards with the same artwork, however, are still on display in Chicago and Peoria.

The University entered into a 10-year contract with Learfield Communication in July 2012. Learfield would sell corporate sponsorship packages and manage the University’s radio network and in exchange, the University would be guaranteed a seven-figure annual income from the company.

Duncan declined to comment as to whether there was a miscommunication between Fighting Illini Sports Properties and MillerCoors.

In addition to its advertising partnership with the University, MillerCoors gave a $20,000 grant to promote alcohol education on campus. Kaufmann said the money has not been allocated to any programs yet, but the University has until the end of June 2015 to use the grant.

Despite entering into a partnership with MillerCoors, Kaufmann said the University has no plans to implement beer sales in the general seating areas of Memorial Stadium or the State Farm Center.

Alcoholic beverages are still sold at the venues, but only to certain customers. Fans with premium seating at Memorial Stadium can buy drinks on game day, and the State Farm Center sells beer at select concerts and shows.

The University is one of nine Big 10 schools that sell alcohol at home football games in some capacity. Minnesota is the only Big 10 school that allows beer sales in the general seating sections of its stadium, and has had mixed results so far.

According to sales figures released to the Associated Press, during the 2012 football season, Minnesota’s first year of alcohol sales, the university lost nearly $16,000, despite fans purchasing more than $900,000 in beer and wine. However, Minnesota has since recovered from its initial loss, and has expanded alcohol sales at TCF Bank Stadium, bringing the total points of sale for alcoholic drinks to around 150.

There are currently 21 universities across the country that allow the sale of alcohol for general seating areas of their football stadiums, and not without reason.

A 2013 study from the Journal of Sport Management found that universities that allowed the sale of alcohol in general seating areas generated nearly $600,000 more in total concession revenue than schools with dry stadiums.

Excluding premium seating areas in Memorial Stadium and select events at the State Farm Center, the University said it does not have plans to expand alcohol sales to general seating areas at sporting events.