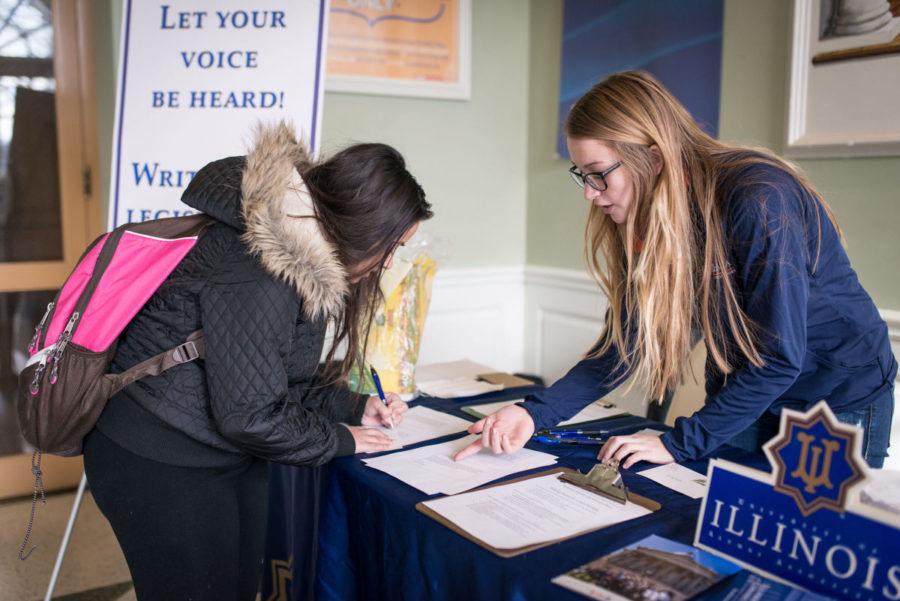 Rebecca Wilson (right), junior in LAS, shows Jakia Hussian, freshman in LAS, a list of potential topics to write to the Illinois State Legislature during the Student Alumni Ambassadors’s letter writing campaign at the Illini Union on Wednesday.

As freshman Jason Selling walked into the Illini Union Wednesday afternoon, he was hardly thinking about writing a letter to his federal representative, but seconds after walking through the doors, that’s exactly what he found himself doing.

Whether it was the temptation of free cookies or the enthusiasm of the Student Alumni Ambassadors, SAA, who were volunteering for a letter-writing campaign, Selling couldn’t help but participate.

The SAA and Illinois Connection, the University’s grassroots advocacy organization, hold a letter-writing campaign each semester. Their goal: to motivate University students to write a letter to their federal representative in support of higher education

“I think legislators want to hear from the kids that they’re supporting with their money,” said Maverick Woodside, SAA vice president of student engagement. “If they hear from faculty, it’s going to be less impactful than hearing from students, the people that the money is directly affecting.”

SAA and Illinois Connection’s fall letter-writing campaign coordinates between all three of the University’s campuses and works to encourage students to write to their respective federal representative on higher education issues.

The groups hold a similar campaign during the spring semester, but their letters are sent to state representatives. SAA and Illinois Connection also hold their annual “Lobby Day” in the spring, organizing a multi-campus trip to Springfield so students can speak directly to legislators about higher education policy.

“Students have a huge voice, one that sometimes they forget to use,” McCord said.

By noon on Wednesday, just two hours into the first day of the campaign, volunteers had already collected 70 letters out of their 300 letter goal.

Every semester, SAA and Illinois Connection reach out to thousands of students to raise awareness for their campaign by sending emails, posting on social media and setting up their letter-writing stations in high-traffic areas on campus.

For the volunteers of the letter-writing campaign, giving students the chance to voice their concerns to their elected representatives is essential to the political influence of college students.

By the time Selling had finished writing his letter, he felt the same.

“In order to have your voice be heard, you have to actually speak your mind every now and again,” Selling said. “This is the way to do that.”

SSA and Illinois Connection will continue the letter-writing campaign at the Ikenberry Commons on Thursday from 10 a.m. to 2 p.m.