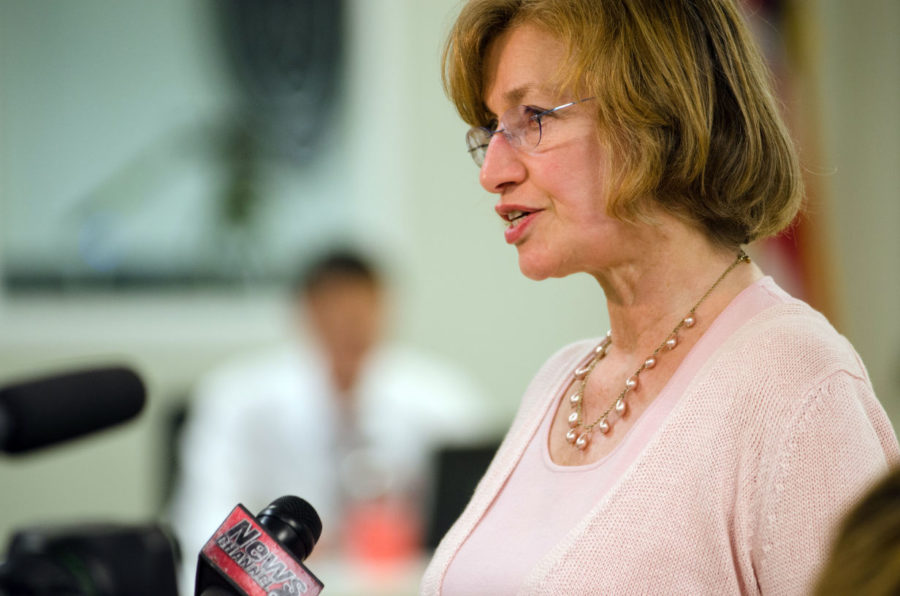 Urbana Mayor Laurel Prussing will invite the University to a discussion about the recent lawsuit against the Carle Hospital Foundation.

For Bobby McAllister smoking is a way to combat the high-stress environment that comes with college.

“I have tried quitting smoking — and I have quit for about a month and a half with the patches — and then I got to school and stress started again,” said McAllister, senior in LAS.

Smokers aren’t going anywhere, he said. If the University wants to enforce the ban, he believes it needs to offer students more free resources to quit smoking.

The University ban on smoking went into effect in January and was soon followed by an Illinois state law in July, which barred smoking on all state campuses.

“We discussed a revaluation before it became a state law to ban smoking on campus,” said Renee Romano, vice chancellor for student affairs. “We will not have to decide to continue the ban because it is now a state law, but we will still discuss the topic.”

A student smoke-free ambassador program that enforced the ban last semester ended this year due to a lack of funding.

Sarah Sommer, graduate student in LAS, worked as a smoke-free campus assistant last year. She trained and managed a team of student ambassadors whose purpose was to educate people on campus about the ban.

Last year, students were able to apply for the ambassador team and selected students who took weekly shifts around campus and discouraged those who continued to smoke.

“The University has mostly focused on voluntary compliance through education,” Sommer said. “This included increased signage and communication around campus, and the student ambassador group.”

She said in cases of repeated noncompliance, existing campus disciplinary measures are followed. Additionally, there is a reporting mechanism on the smoke-free campus website where people can report violations of the policy.

Romano described the University’s enforcement of the ban as an educational, soft enforcement. The University has not issued tickets for smoking on campus and has no plan to issue tickets in the future.

According to the University smoke-free website, smoking is defined as lighting or burning of any type of substance that contains tobacco or lighting of burning non-tobacco plants or marijuana. This ban also includes electronic cigarettes.

“I think that perhaps students won’t start smoking,” Romano said. “Young people tend to start smoking and becoming addicted at this age, if they don’t start it leads to a healthier campus.”

McAllister said he has tried to quit smoking at home through the use of patches, which he receives from his mom’s health care plan.

“They said in the rules that they are going to offer anti-smoking treatments. They do at McKinley, but it costs money,” McAllister said. “The University should give out free patches or gum because if they really want people to quit smoking habits on campus, that’s what you have to offer.”

McKinley Health Center offers programs to help students stop smoking, but it comes at a cost. Zyban, a drug to help quit smoking, costs $5 per month, a box of nicotine gum costs $25 and nicotine patches cost $15 per week. The center also offers three programs that include options for free counseling sessions or paid treatment.

Beth Frasca, health educator at McKinley, works with individuals that come in for help quitting. Frasca said patients can talk to a nurse practitioner or a physician to determine if counseling, tobacco cessation aid or medicine is necessary.

In addition, McKinley offers group or one-on-one counseling to determine if individuals are ready to quit smoking or to offer the necessary resources to quit.

“The goal of the smoke-free campus policy is to create a healthier environment and protect everyone on campus from second-hand smoke, since studies have shown there is no safe level of exposure, even outdoors.” Sommer said.

Elyssa can be reached at [email protected].