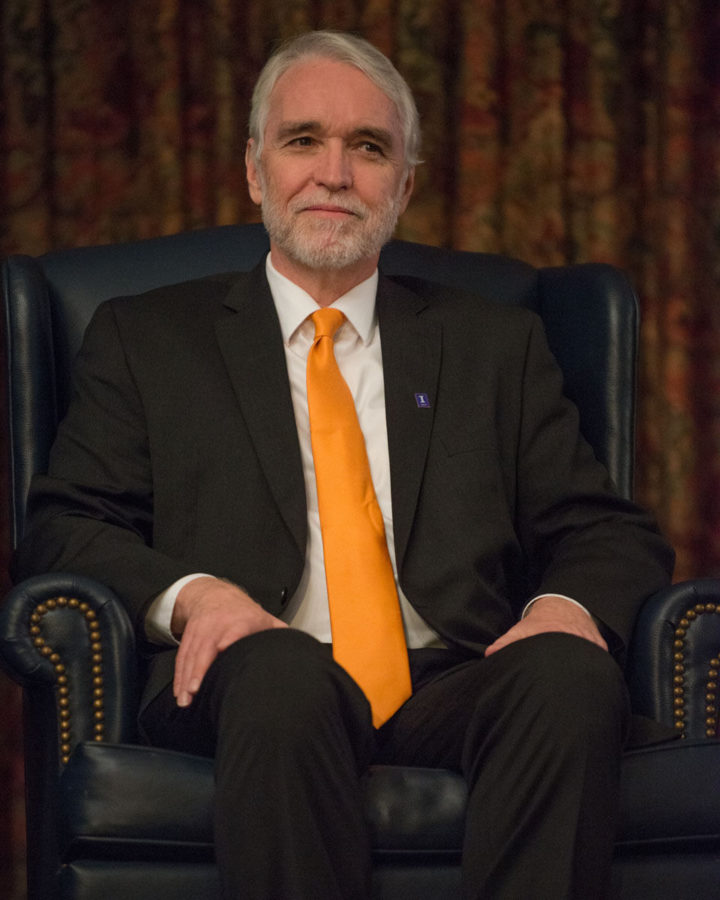 Timothy Killeen, president-elect, sits as he is introduced to campus at the Illini Union on Nov. 19.

Timothy Killeen was appointed the University’s 20th president this semester, succeeding President Robert Easter when he retires in July 2015.

The former vice chancellor of State University of New York was introduced as the next University president Wednesday Nov. 19 at press conferences on each of the three University campuses.

The 62-year-old Wales native and U.S. citizen has over 30 years experience in higher education, serving roles in administration and as a researcher in geophysics and space sciences at the University of Michigan, according to a press release from the Board of Trustees.

Killeen earned his Ph.D. from University College of London at age 23 and has received three achievement awards from NASA.

For him, Killeen said working at the University is a homecoming of sorts because all of his past work led him to Illinois. The president-elect already has big picture goals for the institution.

“I am a genetic optimist, which is not a scientific term, I have one gear and that’s moving forward with optimism,” Killeen said.

The University president is the chief executive officer of the University, as well as the executive agent of the Board of Trustees. Killeen will work with the board to establish general University goals and practices.

“One of the great things about Tim Killeen is his global mission to empower and educate the people of the state but to also serve the industries that are a part of that state’s economy,” Board of Trustees Chairman Christopher Kennedy said at the press conference in November.

Additional responsibilities include ensuring continued economic support for the University and representing the University to the state government, the public, corporate and civic leaders, alumni and donors.

“State funding is one problem, investment support, research, grant funding, there are many pieces which contribute to this problem,” Killeen said. “And I think what I would like to do is to really indulge the exciting value proposition of what the University of Illinois is to the state, for the state and for the population.”

He stated that he hoped to do a “listening and learning tour” in January after the holidays, however no official plans have been made yet.

As president, Killeen will make an annual base salary of $600,000. With potential performance and retention bonuses, he could make up to $730,000 per year. Killeen will outearn his predecessor by $121,442 a year. His compensation is ranked seventh out of all Big Ten presidents.

Killeen said he and Easter are going to stay connected and be partners, even though he said, “Easter thinks he can get away as he moves toward retirement.”

Killeen is insistent on collaboration and teamwork with all other University officials and faculty as well.“We’re not going to come in with a blueprint and say this is how it’s going to be,” Killeen stated. “I’m going to be insistent upon motion and mentoring, building enthusiasm and optimism.”