Rauner sworn in as Illinois governor 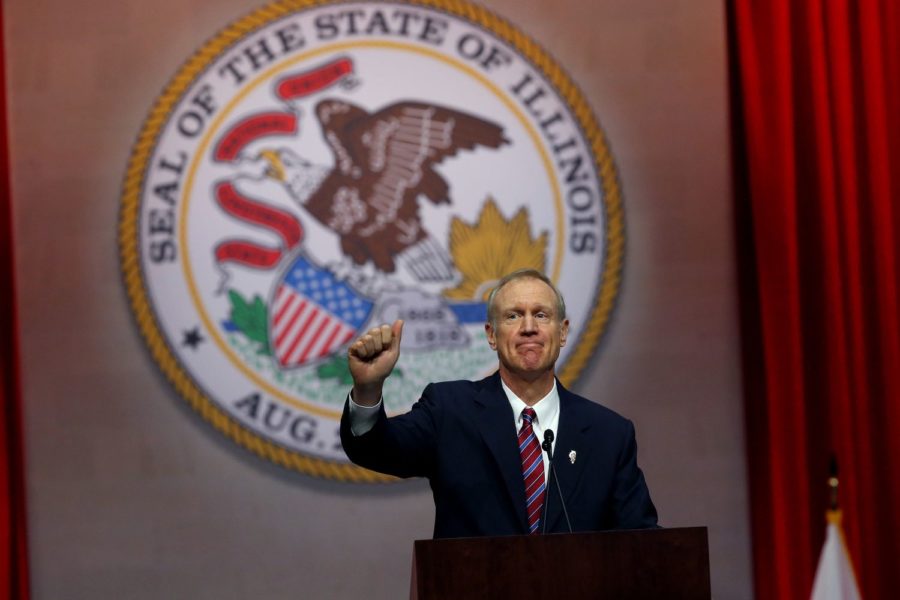 The Illinois House overrode Gov. Bruce Rauner's veto of a state budget on Thursday. The state has its first budget since 2015.

Republican businessman Bruce Rauner was sworn in as the new governor of Illinois on Monday in Springfield, replacing former Gov. Pat Quinn after a close gubernatorial race.

“It’s an honor to stand before you, before all the people of Illinois today,” Rauner said during his address to a crowd of supporters, Congressmen and women, Senators, judges and political appointees.

During his remarks, Rauner emphasized job creation, financial stability, education and a stronger code of ethics for Illinois’ politicians. Rauner called on the General Assembly to pass a comprehensive jobs creation package to be presented in the coming weeks and announced plans to sign an executive order on Tuesday that will implement new ethics standards for the executive branch.

“To the people of Illinois, and the people outside our state who have been reluctant to invest in Illinois, the insider deals and cronyism, I say this: I’m nobody that nobody sent,” Rauner said to cheers and applause. “I will send a clear signal to everyone in our state and to those watching from outside our borders that business as usual is over, it stops now.”

Rauner also spoke on the ongoing budget crisis facing the state and expressed that his administration will have a “moral obligation” to reduce taxes on Illinois’ citizens, reduce government spending and increase the efficiency of tax dollars.

Rauner said that to improve Illinois national standing in education quality and job growth will “require sacrifice from all of us.” By doing so, he continued, people in Illinois will all benefit from the new prosperity.

“This administration will make our decisions based on the next generation, not the next election,” Rauner said.

Rauner was not the only politician to take the oath of office on Monday. Following Rauner’s remarks, Lieutenant Governor Evelynn Sanguinetti was sworn into her new position. Additionally, Lisa Madigan was sworn in as Attorney General, Jesse White as Secretary of State and Champaign-native Michael Frerichs as Treasurer.

Leslie Munger took the oath of office for Illinois Comptroller, replacing Judy Baar Topinka, who died in December. However, before leaving office, Quinn enacted legislation requiring a special election to fill the position this November, which could potentially limit Munger’s time in office.