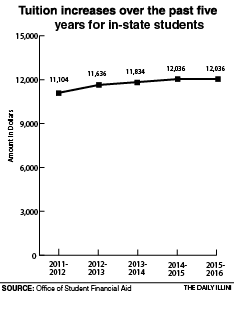 For the first time in 20 years, the University will freeze tuition for in-state freshman enrolling this fall.

The Urbana campus’ baseline tuition will remain at $12,036 and out-of-state tuition will increase with inflation. For the past two years, base tuition increased by 1.7 percent annually, according to reports by the Board of Trustees.

The Board of Trustees met Thursday in Chicago and unanimously agreed to not raise tuition, in an effort to keep the University competitive in comparison to other schools.

Trustee James Koritz said he felt it is important for students, families and residents to realize that students are promised a set tuition rate for their entire time at the University.

“I think one thing that’s underappreciated about our tuition scheme is that by state law a student has guaranteed tuition for their four years,” Koritz stated.

University Vice President Christophe Pierre said many universities have frozen tuition, including Purdue University and the University of Wisconsin-Madison. He added the freeze will only make the University more competitive with its peers.

Pierre concluded the tuition freeze not only helps the University remain competitive, but fulfills its mission to provide affordable, quality education.

Although the University is working toward providing more affordable tuition, the cost is still too much for many families. Dan Mann, director of student financial aid, said most middle class families struggle to afford University tuition.

“As it’s costing more and more, I think many families are really struggling to pay the cost of education, Mann said. “A lot of programs like Pell and MAP are designed for the lowest of income levels. More like the first and second quintile instead of the middle incomes of maybe, $50,000 to $150,000. There’s not a lot of need based aid available for those families.”

Mann said that efforts are being made to help ease the burden of tuition, and students should search for external scholarships and stay on a budget.

Abigale can be reached at [email protected].