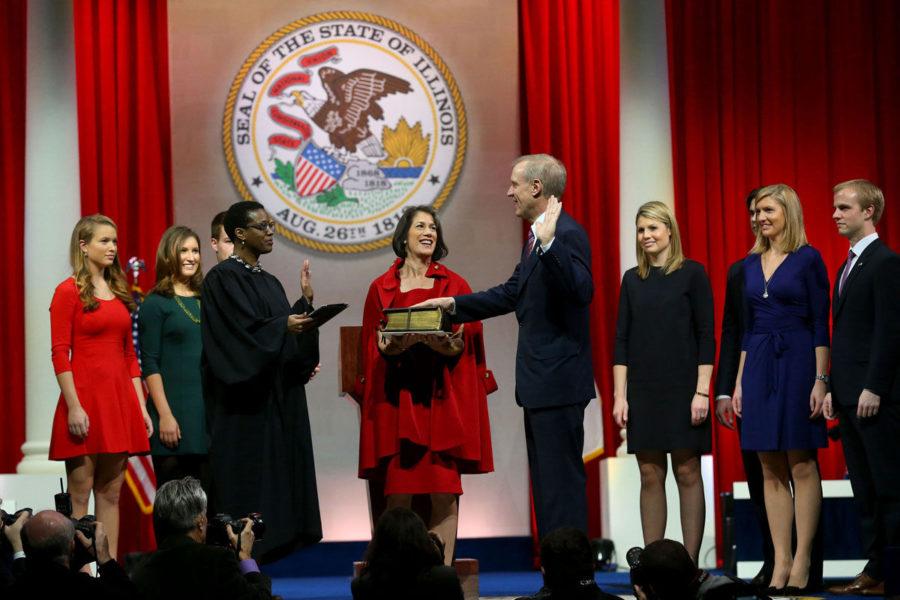 Bruce Rauner with his wife, Diana, by his side is sworn in as governor of the State of Illinois on Monday, Jan. 12, 2015 at the Prairie Capital Convention Center in Springfield, Ill. Rauner's 6 children and son-in-law are on the stage with them.

While the chaos of November’s elections may be over, the 2015 legislative session promises to be a challenging one for Illinois politicians, particularly as major fiscal challenges face the state.

“The top issues will be fiscal; how to reduce spending and increase revenue,” said Brian Gaines, professor of political science. “On the revenue side, the top question is whether the General Assembly and Bruce Rauner can reach a compromise on some extension of an income tax rate over 3 percent, but under 5 percent.”

To close the gap in Illinois’ budget shortfall, newly-inaugurated Governor Bruce Rauner and the General Assembly may increase revenue by raising taxes, cutting government spending or devising a combination of the two. According to a January 2014 report by State Budget Solutions, a nonprofit organization, Illinois has a debt of more than $321 billion.

This may be easier said than done. Rauner, a Republican, must work with the Democratic majority in the General Assembly, which could mean an ideological clash in Springfield over state economic policy.

Kent Redfield, emeritus professor of political science at the University of Illinois at Springfield, said both parties are eager to solve Illinois’ fiscal woes as soon as they can, which could make them more willing to compromise on certain legislation.

“It’s in everyone’s best interest for the state to have made some progress (on the budget),” Redfield said. “Rauner, when we get to 2016, wants to show that he’s making good on his promises, things are getting better.”

Some politicians have already come forward to make calls for bipartisanship in 2015. State Treasurer Michael Frerichs, a Democrat, expressed his willingness to work with representatives on both sides of the aisle to solve Illinois’ ongoing pension crisis.

“We need to go back to the drawing board, sit down with all parties that are invested in this and reach an agreement,” Frerichs said. “We all have an interest in making sure the state can pay its bills and meet its obligations.”

On top of pressing fiscal issues, education has been a hot topic in recent Illinois politics, Redfield said, particularly regarding the organization and funding of kindergarten through 12th grade education.

“It is likely you’re going to see a conflict over how we’re going to organize education in K-12 and where our priorities are and how that relates to things like vouchers and charter schools,” Redfield said.

During his campaign, Rauner advocated for privately-funded charter schools and increased teacher testing and accountability, Redfield said. This will likely put him at odds with progressive legislators.

State Sen. Scott Bennett, D-52, is one of the legislators at odds with Rauner over education. Bennett, who was recently appointed to fill Frerichs’ vacant Senate seat, said he plans to push for comprehensive education funding reform during his first term in office. He hopes to find a solution to equally fund Illinois’ schools, many of which he says have become drastically unequal in their available resources and quality of instruction.

“K-12 funding right now is this kind of antiquated formula which nobody really seems to understand,” Bennett said. “The state funds well below what they agreed is the minimum funding per student, and so what happens is more and more (funding) is made by property tax. It’s no surprise there’s a huge disparity between some of the poorer districts and the wealthier districts in the state of Illinois.”