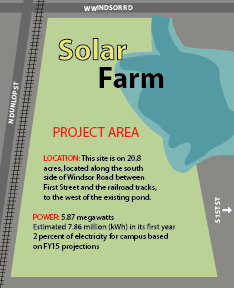 The University is continuing a trend of investing in sustainability projects with the approval the construction of a solar farm.

This month, the University signed a power purchase agreement with Phoenix Solar Inc., which will manage the facility for the first 10 years of its energy production.

The farm will be located along the south side of Windsor Road, between First Street and the railroad tracks, the 20.8 acre solar farm will be one of the largest on-site university solar farms in the country.

“We are very pleased to see this long awaited agreement completed and signed, so the installation can begin,” said director of Facilities and Services Al Stratman in a statement. “This unique and challenging project was only made possible through the dedication of many people working together and focused on achieving our renewable energy goals.”

The cost of the construction of the solar farm and its operation over the next 20 years is estimated to be $15.5 million. Morgan Johnston, associate director of sustainability at Facilities and Services, said the new solar array will significantly reduce the amount of energy the University buys from third-party energy providers.

“We’ve been working on on-site renewable energy and investigating other methods of getting renewables; we make some of our energy and we buy some,” Johnston said. “We wanted to have actual, on-site generation for renewables, and we wanted a large field to reach that goal.”

In 2008, the University signed on to the American College and University Presidents’ Climate Commitment, pledging to reach carbon neutrality by 2050. The renewable energy requirements for the commitment were outlined in 2010, and the new solar farm is just one of Facilities and Services’ projects pushing the University toward meeting this goal.

“There’s actually hundreds of projects in the works,” Johnston said. “They range anywhere from a discussion about battery recycling to a 100,000 fixture lighting retrofit all across campus.”

The 5.87 megawatt solar array, which is set to be completed in fall 2015, is estimated to provide 7.86 million kilowatt hours (kWh) in its first year of operation, meeting 2 percent of the University’s total energy demand.

The solar farm is intended to be used purely as an energy utility for the University, Johnston said, and there are no plans to incorporate its operation into University curriculum.

Major funding for the project was provided by the Student Sustainability Committee, which contributes $1.1 million annually toward sustainability projects on campus. The committee receives funding through the Sustainable Campus Environment Fee and the Cleaner Energy Technologies Fee.

SSC Chair Amy Liu said the solar farm is just one of the hundreds of sustainability projects the student organization has helped to finance, including recycling and transportation projects.

“As the funding entity for the Cleaner Energy Technologies Fee, SSC is a strong proponent for the University’s pursuit of carbon neutrality,” Liu said. “Moving forward, SSC will have contributed $1.05 million and an innumerable amount of time spent on project planning.”