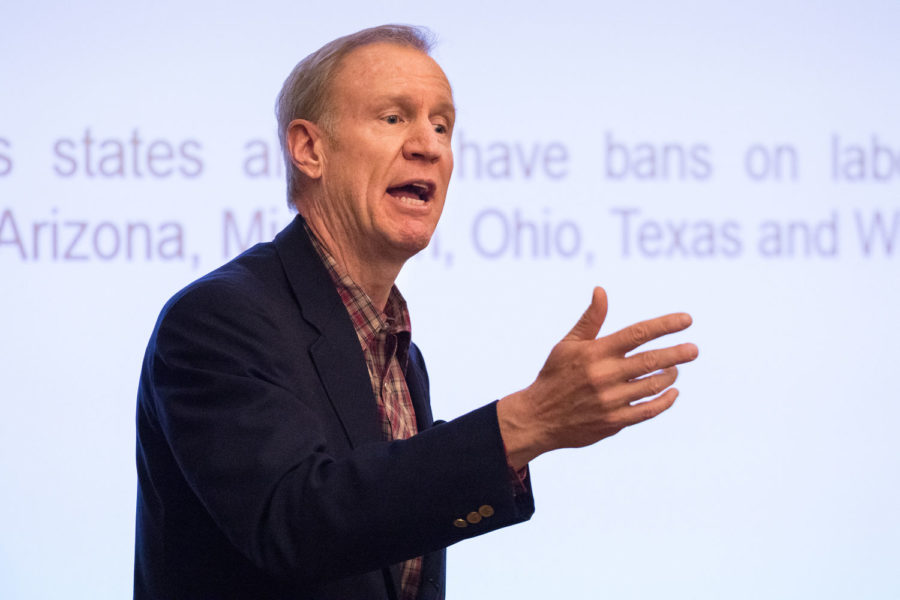 Illinois governor Bruce Rauner gives a preview of the State of the State at the I-Hotel Ballroom on Thursday, Jan. 29, 2015.

Ahead of his Feb. 4 State of the State address, Gov. Bruce Rauner outlined his goals to members of the Champaign Community at the I-Hotel Thursday.

Rauner discussed problems facing Illinois that he hopes to fix during his time in office to “make Illinois the most competitive and compassionate state in America.”

“The short summary of the state? It’s not good,” Rauner said soon after taking the floor, receiving laughter and applause from the crowd gathered in the Illinois Ballroom. “I ain’t going to take that anymore.”

Rauner spoke alongside a PowerPoint presentation, which he used to detail the issues he hopes to address in the coming legislative session. These included education, tax reform, job growth, stagnant wages and public labor unions.

Rauner spoke at length on Illinois’ education system, particularly on the need to improve the quality of education for K-12, community and vocational college students. He said the state needs to do more to increase access to high quality vocational job training, which could bring more jobs into Illinois.

“We’ve got jobs here, (but) we can’t find the people with technical skills to fill those jobs,” Rauner said. “That’s a fundamental failure of our education system.”

Rauner said Illinois teachers should be treated like professionals and well-paid with good benefits. He hopes to bid “good riddance” to the state’s Illinois Standard Achievement Test, which he said was lowering the quality of education.

Later, Rauner discussed his plan to make the University “an even more powerful engine of economic growth and job creation.”

He presented four recommendations to make this goal a reality: adjusting faculty and research compensation to ensure the best faculty possible; reducing administration bureaucracy to cut overhead costs; continuing to freeze tuition to maintain competitiveness; and expanding the University’s footprint in engineering and applied sciences throughout the state.

“If the University will work with me on these issues, I want to make this happen,” Rauner said.

The governor expressed the need for a “low, simple and broad” tax system, saying that raising taxes alone would not be enough to fix Illinois’ budgetary problems. He also emphasized encouraging job growth and competition in the state, and said he would travel the nation at his personal expense to bring in new business.

“We’ve got to be pro-business, pro-investment and pro-growth — we’re not that today,” Rauner said.

Local union members, including representatives from the Graduate Employees’ Organization, assembled outside of the I-Hotel to protest the governor’s position on unions, specifically his support of “right to work” measures during his campaign.

Rauner described Illinois as “the most unionized state in America” and discussed his frustration with high teachers’ union dues and mandatory membership for other careers. He said people should not be “forced” or “threatened” into joining a union, but should be able to choose for themselves.

In closing, Rauner said his administration will work to maintain an open chain of communication with the public, encouraging members of the audience to reach out to him if they had a problem, disagreed with a policy or had any suggestions.

“If you’re not thriving, we’re failing,” Rauner told the crowd. “It’s hard to move everything on a dime, but we can begin the process.”