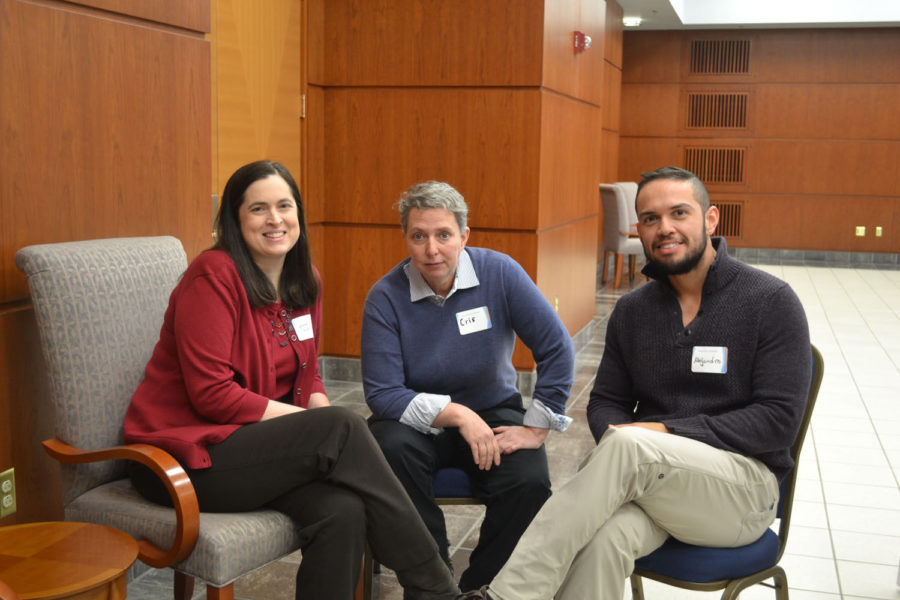 Co-Chairs Julie Dowling, Department of Latino/Latina Studies, Cris Mayo, of the College of Education, and Alejandro Gomez Vice-Chair of the Committee from the Counseling Center, organized a round-table discussion on issues impacting the LGBT community at the Alice Campbell Alumni Center on February 20.

Living in a small community like Champaign-Urbana creates its challenges for LGBTQ faculty and staff of the University. While there is a significant LGBTQ population in and around the towns, meeting fellow LGBTQ residents is not as easy compared to living in a larger city like Chicago or San Francisco.

There is one comfort in town called the Chester Street Bar, which was voted for 2012 Best Gay Friendly Nightlife by the readers of Buzz magazine. However, multiple nights out of the week, the bar is rented out to Greek life for exchanges, which causes some frustration for members of the local LGBTQ community who feel C-Street is the one pleasant place for nightlife fun.

“This concern speaks to a larger issue and that is the only bar that folks feel like they can access and feel kind of comfortable in,” said Devon Guidoux, the assistant director of the LGBTQ Resource Center. “It would be helpful to have more spaces, more restaurants, more bars or clubs, or just meeting places that feel affirming. If one place is closed for a night and there is a perception that this is the only place, that can be really challenging.”

Because the University is located in the Midwest, Guidoux said there tends to be a stereotype about the region, including notions that many inhabitants are farming conservatives, which may be true in some instances but false in others. Yet according to the LGBT-Friendly Campus Climate Index, UIUC has an overall Campus Pride score of 4.5 out of 5 stars.

The LGBTQ Resource Center has been making progress with a wide variety of efforts across campus. For instance, the recent survey in Allen Hall for the weeklong trial period of a gender-neutral restroom on one floor. Though there did not appear to be enough of an interest, the center is optimistic about the progress of the housing offices to reach out to them.

Guidoux said there is evidence suggesting the education of the public will help spark more interest among students for a possible trial to succeed. If a large number of students are confused about what gender-neutral bathrooms would provide for some, then education could potentially result in a step forward for the campus’s LGBTQ community.

Struggles also include lack of funding for academic research of LGBTQ studies, no way of tracking numerically the LGBTQ students on campus and lack of demographic questions on admission forms.

A resolution discussed at the Chancellor and Provost Committee on LGBTQ Concerns’ “Beyond Visibility” luncheon Friday asked for more options to be available under the question of gender identity. These options would include: man, woman, trans or other. It also asked for an optional demographic question regarding sexual orientation, which would allow for the administration to measure the population of LGBTQ students.

The topics at Friday’s luncheon focused mainly around professional development and mentoring. Daniel Maroun, Ph.D. candidate in the French department, explained that his experience in graduate school was the ideal situation and discussed how one professor alone introduced him to LGBTQ research that he still does today.

“He founded my passion for wanting to spread equality, solidarity and the desire to know what real mentorship can mean and how I can start to light the fire within students that we come into contact with daily … and how they really want that connection and visibility,” Maroun said.

When plans for mentoring students were analyzed, the conclusive idea among the panel was not only to show interest and concern for students’ well-being and life but also encourage students to be hardworkers.

Maroun also described how important it is for students to “believe that there is community out there that will constantly be there for us.”

During roundtable discussions, the idea of “being present” resurfaced from the panel and Guidoux elaborated on the topic.

Guidoux said getting involved in different communities on campus and showing up to events is a great way to be present. Other ways include how individuals choose to decorate their office, dorm room, backpack and more.

For example, Guidoux said having a rainbow sticker on a notebook is a way to show your support and could potentially increase the comfort of a person who sees it.

“Its a small step you can take, but you don’t know the kind of impact it’s going to have,” Guidoux said.

The committee is launching the LGBTQ Employee Affinity Group and is welcoming all LGBTQ University employees to attend its first meeting on March 2 at 2 p.m. in room 404 at the Illini Union.

Not only will the group allow for social interaction among LGBTQ employees but also establish a comfortable environment to discuss current notions relevant to their concerns and triumphs.

“So often it’s thought that students are the only ones that exist on this campus when there’s a lot of staff and faculty who are looking for support as well,” Guidoux said. “There are a lot of positive things on the horizon.”

Madison can be reached at [email protected]